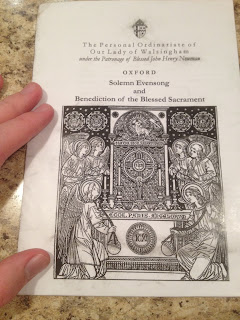 In the last year or so the Ordinariate has made great sense to me, the finalization of the Oxford Movement and a cultivation of constant, sound liturgical practice. It did not make so much sense when I witnessed the erection of the English Ordinariate in 2011, with Msgr. Burnham—a fine man—celebrating a Paul VI Mass on Sunday nights at St. Aloysius. The Ordinariate was not yet using the Anglican Use liturgy, just the reformed Roman rite. To my surprise, while rummaging for my passport (need to escape Texas) I happened upon the booklet for what we were told was the first ever unique Ordinariate liturgy.

It was on a Wednesday and a friend was accompanying me to a lecture on quantum physics. We noticed a mutual acquaintance enter Blackfriars and decided to follow him. No sooner had we greeted him than he shoved this slim volume into my hands, re-assured me it was a "short" service, and turned to the next guest. The church was packed with an unfamiliar crowd. The bell rang and the servers escorted Msgr. Burnham with his two assistants, wearing vestments from the Oratory, to the sanctuary.

What followed was an English-language service of Vespers and Benediction which I am unsure has survived into the observed Ordinariate liturgy.

The service began exactly as old rite Roman Vespers, with five psalms, the Veni Creator as the hymn for this votive Evensong of the Holy Ghost, and the Magnificat. A long reading from Exodus replaced the chapter, unless such is the Anglican tradition. Jarringly, there were no antiphons of any sort to frame the service. Another Biblical reading, extracted from Corinthians, followed the Magnificat, then the Nunc dimittis, the Creed, the Our Father, and some versicle prayers. 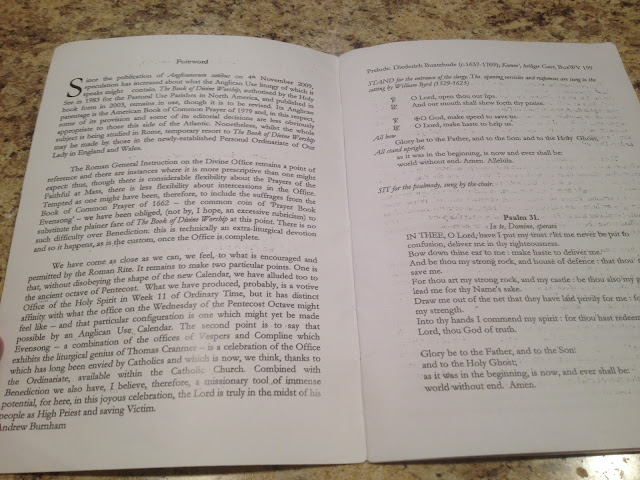 Then came the collects of the day, for peace, and against perils. Anyone who prays the pre-Pius X Office should recognize the English version of the prayer Deus, a quo sancta. 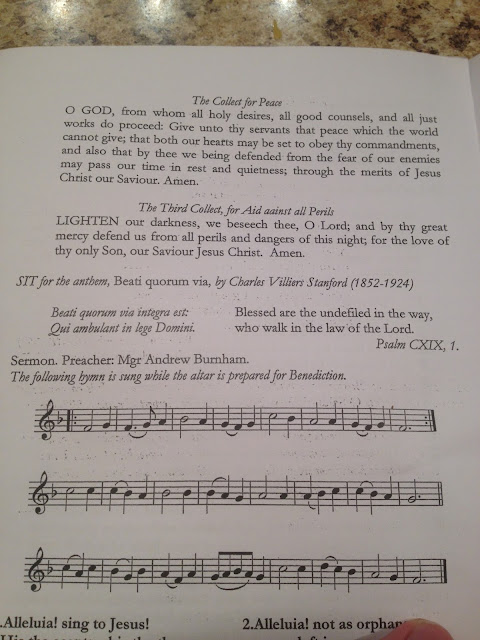 Then came Benediction, which I did not see, but I did hear in the form of a recording later. Tantum ergo should not be sung in English. My friend, a convert from Anglicanism, felt uncomfortable and wanted to go; "I feel like a protestant again," he whelped. The first half of the service bothered me greatly, in my naivete, for I disliked hearing familiar words in another tongue sung to vulgar melodies. 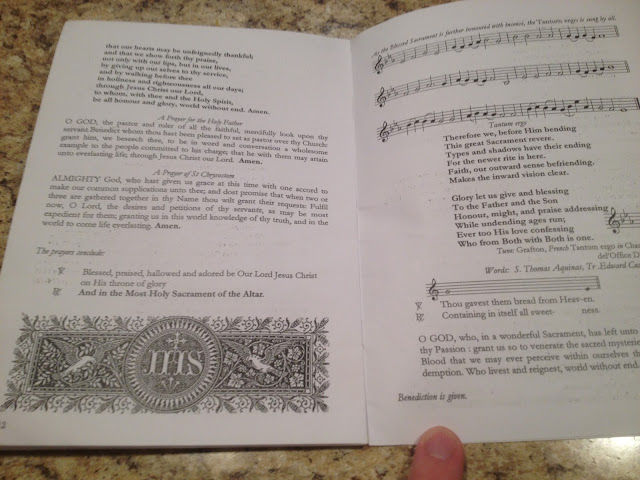 I had forgotten about the entire service for years until stumbling upon this booklet. After praying Evensong with the Houston Ordinariate I cannot say I recognize much of the service here except for the Nunc dimittis and readings. This clearly was an experimental rite, perhaps one that did not greatly influence what the Ordinariates eventually accepted as their liturgy.

I am happy the Ordinariate exists. I recall many cradle Catholics, especially traditionalists, holding a great deal of resentment back then. We should remember that in the parable of the prodigal son, the good son who never left home was the bitter one. The prodigal returned for less than noble reasons, but the father did not care, for his son is home and making good liturgy.
Posted by The Rad Trad at 11:22 PM

Email ThisBlogThis!Share to TwitterShare to FacebookShare to Pinterest
Labels: ordinariate