The name of Jesus has been revered throughout the history of the Church back to the days of the Old Testament, when the Jews would substitute Adonai ("Lord" or "Master") for the name God gave for Himself to Moses, Yahweh ("I am Who I am"). The name of the God Who called Himself the One Who simply is, Who is being itself, was only invoked by the high priest once a year, on the Day of Atonement. The O antiphons sung at the Magnificat on last seven days of Advent revive the Old Testament names of God in anticipation of the birth of the Son of God and His naming an octave of days later. Parents name their children symbolically, honoring either a person from the past or steering the newborn toward what the mother and father desire them to be. With God this does not suffice. In the case of God, His name reflects Who He is, the One Who is, the Lord of all.

The name of Jesus was not a new one to the Jews or Christians of the first century. Jesus etymologically derives from Yeshua, commonly Joshua today. Ye-shua literally translates as "Yahweh is salvation" and was the name of Moses's companion who led the victorious Israelite army in the conquest of Canaan. Honoring their ancestor, Yeshua was one of the most popular male names in the Second Temple period. The first Yeshua fulfilled the promise of God to deliver the Israelites from the land of bondage to a new place of freedom. The second Yeshua, as God made man, would deliver all Who believe in Him from the bondage of death. After the Resurrection and descent of the Holy Spirit at Pentecost believers veered away from naming their children after Old Testament figures in favor of martyrs of the New Testament, although Elias remained popular in Greek Christianity. Jesus would cease to be a called name; instead it would become a revered invocation of God Himself.

Lev Gillet observes that the Biblical expression "at the name of Jesus" comes to us weakly in English from weak Latin, in nomine Iesu. The presumably original Greek text bears a stronger meaning, connoting "by the means", "by the command", or "by the authority" of Jesus. The pre-Nicene Fathers did not theologize the name, but they did follow the tradition of invoking it in times of distress, eventually normalizing its liturgical usage (per Dominum nostrum Iesum Christum....).

The name of Jesus eventually became a prayer unto its own. Latin spirituality is difficult to define before the explosion of Benedictine monasticism, though it was presumably liturgical more than personal like the monastic tradition which sprung from it. St. Augustine's small collective may have anticipated communal living and prayer on a more voluntary, less municipal level, but the common liturgical element remained. Eastern spirituality, at least as far as extant information allows us to know, possessed a more personal element. It is here that the "Jesus prayer" originated.

The "Jesus prayer" has become the focus of Greek spirituality. "Lord Jesus Christ, Son of God, have mercy of me [a sinner]" is prayed by Athonites, but also by laymen of the Constantinopolitan tradition, non-Chalcedonians, Latin monks, and the odd Protestant. The prayer did not reach its current form until the Hesychast ascendance in the Palaiologan dynasty, the last ruling family before the fall of Byzantine Empire, when Orthodox tradition ossified more or less in its current form. The Jesus prayer is a concatenation of two separate prayers used in the first millennium, one by the monks of Sinai and the other by the faithful of Constantinople. The monks of Sinai plainly uttered the name "Jesus" as a simple prayer to remind the one saying it of Christ's personal presence. Contrary to later Athonite thought, the Sinaites believed psalms and the name of Jesus were the only spiritual refuges for those not strong enough to confront their sins directly. St. John Climacus confirmed this tradition in his Ladder (28). The second piece of the prayer was Kyrie eleison, a favored ejaculatory prayer of the monks and laity of Constantinople. The merger of these prayers resulted in our modern day Jesus prayer, popularized by the Hesychast tradition of St. Gregory Palamas.

St. Gregory Palamas did not popularize the Jesus prayer, nor did his proximate followers. In contesting Barlaam's claim that God was not Himself knowable, the Hesychasts found in the Jesus prayer the most perfect place to meet Christ God in His un-created energy, the "light of Tabor." It was in this context that Palamas defended the prayer and in which his later followers advocated its central place in Greek spiritual life. Much like how the Council of Trent and the Counter-Reformation religious orders coagulated the once fluid and vivacious Roman Church, the disaster of 1453, the dissemination of the Greek tradition to the Slavs, the expansion of Athonite monasticism, and the publication of the Philokalia stiffened a once dynamic Byzantine tradition. The Jesus prayer dominated Athos and its descending spiritual houses. Use of the Jesus prayer can substitute for part or all of the Greek Office: 500 times for Vespers or Mattins, 200 for Compline, 700 for the Typika. It should be noted that most non-Athonite communities do not see the name of Jesus as a substitute for the liturgy.

While the name of Jesus did not become its own prayer in the Latin Church, it did continue to be invoked in prayer and as an object of reverence. The Sarum rite has the feast of the "Name of Jesus" on August 7th. Compostela celebrated the feast on January 8th and Liege on January 31st, the Franciscans and Dominicans kept it on sequential January days. Innocent XIII inserted the feast into the Roman rite for the second Sunday after Epiphany, where it is given in my altar Missal. St. Pius X relocated the feast to the Sunday between the Circumcision and Epiphany, displacing the octave days of the comites Christi. Paul VI abolished the feast in promulgating the new kalendar in 1969/1970. The Roman Mass found in the post-Tridentine Missals is remarkably similar to that given in the Sarum books, sharing the Introit and Epistle, but differing in the Gospel (Sarum gives the Angel's relation of the name to Mary while Roman repeats the Circumcision pericope) and orations. While the Roman rite prays:

"O God, You Who appointed Your only-begotten Son to be the Savior of the human race, and commanded that He be called Jesus, mercifully grant that we may enjoy in heaven the vision of Him Whose holy Name we venerate on earth"


"O God, Who has caused the Name of Our Lord Jesus Christ, Your Only Begotten Son, to be loved with the greatest affection by Your faithful, and to be terrible and fearful to evil spirits, mercifully grant that all who devoutly reverence this Name of Jesus on earth may have part in the sweetness of holy consolations in this present life, and in the world to come may attain unto the fullness of joy and eternal praise."

This snippet of the Sarum sequence, given below, highlights the contrast between the post-Tridentine and Norman interpretation of the Name. 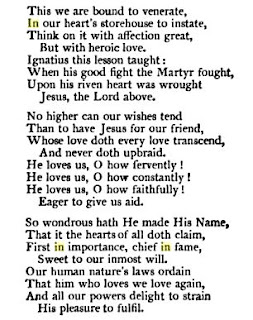 The newer Roman feast sadly neglects the historic emphasis on the personal nature of name, that the faithful can call upon "Jesus for our friend" and ask Him to repel all that may come to harm us. The odd Roman Mass instead centers on the fact that the recently born child was given a name, making the feast redundant.

We call Him the Lord, God Almighty, and Our Redeemer. Perhaps in understandable retraction from protestants haphazardly tossing around the name of the Son of God we have reverted to the Old Testament fear of uttering the name of God. This need not be. Due to Him is all reverence in worship, but on our knees we can address Him as a person to be known and kept in company, that He may forgive our sins and we may give glory to His name.