Here at the End of All Things 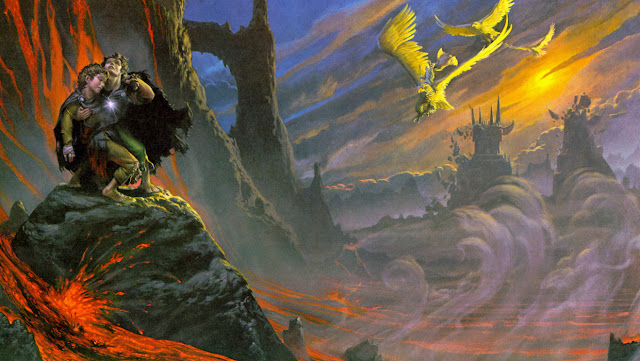 With the centennial of the appearance of the Virgin Mary at Fatima rapidly approaching, a fresh round of eschatological predictions have begun in the traddosphere and beyond. While I’m a bit of a wet blanket on the Fatima Parade, I can’t ignore the historical significance of the Mother of God initiating a major celestial sign seen even by blasphemers and unbelievers. The hundredth anniversary of her appearances would not be an unreasonable time for her to reappear and remind us of our duties towards God.

I grew up in an atmosphere of calm, Protestant assurance that the End Times, they were a-comin’. My family’s bookshelves were filled with prophetic insights into the events of the 1970s and 80s, with authors like Hal Lindsey, Salem Kirban, and Jack Chick forming the apocalyptic imagination of my childhood. The creation of the modern state of Israel in 1948 was considered a special sign that God was preparing to wrap things up in a big way, and all that was left was to get a few other political powers in place. Dispensationalist Zionism survives into the new millennium in large part because of the shockingly successful Left Behind series of novels, but also because world events continue to provide raw material for terrifying speculations.

We Catholics have our own forms of eschatological speculation, although there are so many schools of thought that a newcomer can scarcely make heads or tails of them. Aside from a few clear doctrines like the Resurrection of the Dead and the Final Judgment, most of the details are up for grabs. There will be a great apostasy towards the end, and the Antichrist is likely to be a final individual opponent of Christ and his Church. Some of the other beliefs—the three days of darkness, the coming chastisement, the great monarch—are all fascinating but far less certain.

When I came into the Church, I intentionally ignored the internal eschatological speculations as much as possible, having decided that I had had my fill of those in my younger years. But an intense interest in the Second Coming is not necessarily intellectual restlessness; it is a yearning for the hope of our deliverance from this world of death and defeat. The world is a burden to us, even though it is often joyful and enlightening. Too much does this world drag us down, too much are we disillusioned by Church politics and world politics, too much are we exhausted from fighting our own concupiscence. We hear so many stories of our brethren in other parts of the world suffering and dying for the Faith, and we greatly desire the hope of Christ’s return to put an end to the futility of this life. It is a virtuous desire to see ultimate Justice have its Day.

And when he broke the fifth seal, I saw there, beneath the altar, the souls of all who had been slain for love of God’s word and of the truth they held, crying out with a loud voice, “Sovereign Lord, the holy, the true, how long now before thou wilt sit in judgement, and exact vengeance for our blood from all those who dwell on earth?” (Apoc. 6)

I do not know if the formulations of eschatological timelines is wisdom or mere idleness, but the fulfillment of Our Lady’s warnings of war should be enough for us to take her seriously. The fact that the centennial of her appearance coincides with the 500-year anniversary of Fr. Luther’s reformation should also give us pause, as should the Holy Father’s celebration of this event. We do not know what events are already in motion, whether in preparation for the end of all things, or for a temporal judgment against “those who have mastery of the world in these dark days” (Eph. 6).

The end times will not be lovely, and they will not be pleasant to live through, but our desire must always be set towards them. The final prayer of Holy Writ—“Come, Lord Jesus”—should be our constant prayer, as well. Come now in our souls, and come again to end this world.

Email ThisBlogThis!Share to TwitterShare to FacebookShare to Pinterest
Labels: End of the World, Fatima