While the figure of St. Joseph is not ubiquitous in artistic portrayals of the Nativity, he has never been entirely alien to the subject. There are various forms of Nativity-related iconography, including the Adoration of the Shepherds, the Adoration of the Magi, the Cave and the Stable, the Eucharistic Child (where the ox and the ass nibble on the Christ Child), and scenes of the Midwives. Often these forms are collapsed together in various combinations, depending on how much of the Gospel and apocryphal narratives the artist or patron wished to include.

Even though Joseph is often absent in earlier depictions, he does seem to make an appearance on this early 4th-century Roman sarcophagus at the bottom-left (most of the early Nativities on sarcophagi depict the Virgin alone):

He is present in some panels of this 6th-century cover of the Armenian Echmiadzin Gospel, though noticeably absent from the Cave and Stable panel:

This Palestinian painted box from the 6th century shows Joseph, Mary, and Christ in iconographic positions that would remain standard in the West for many centuries, and in the East until the present day. All three figures are positioned physically apart, with Joseph contemplating the scene as one not directly involved with the mystery. The Virgin appears to be pointing the Christ Child out to Joseph or to the Christian viewing the icon.

Giotto’s fresco of the Nativity in the early 14th century still has a discernible connection to the earlier iconographic tradition. Although Mary is now holding the Christ Child, St. Joseph still sits apart, with a look either contemplative or sullen.

The medieval books of hours often included an illustration of the Nativity. This book of the Use of Rome from Paris, France (late 14th or early 15th century) shows St. Joseph huddled up against the cold next to the Virgin’s bed, without even a glimpse of his face:

The late 14th-century mystical visions of St. Brigit of Sweden instigated a major change in the depiction of the Adoration of the Christ Child. This passage especially marks a change in how Joseph is imagined in the Nativity scene:

When these things therefore were accomplished, the old man entered; and prostrating on the earth, he adored him on bended knee and wept for joy. Not even at the birth was that Virgin changed in color or by infirmity. Nor was there in her any such failure of bodily strength as usually happens in other women giving birth, except that her swollen womb retracted to the prior state in which it had been before she conceived the boy. Then, however, she arose, holding the boy in her arms; and together both of them, namely, she and Joseph, put him in the manger, and on bended knee they continued to adore him with gladness and immense joy. (source)

This painting by Niccolò di Tommaso (ca. 1372) is the first known representation of St. Brigit’s vision, in this regard. For the first time Joseph and Mary are mirrored in their placement and action.

Another example from a late 15th-century book of hours from France:

There are exceptions. The 16th-century Hours of Joanna the Mad, commissioned from the Flemish Gerard Horenbout, unusually depicts a stable-based Adoration without Joseph anywhere present:

The new iconography became standardized in the West, but with eventual modifications. For instance, St. Joseph is sometimes shown standing behind the kneeling or seated Virgin, perhaps to stand on guard or to better facilitate the sudden influx of visitors to the stable. St. Brigit’s vision of the Mother and Step-Father of Christ adoring in unison was becoming less ubiquitous, but Joseph in return became a more imposing figure. 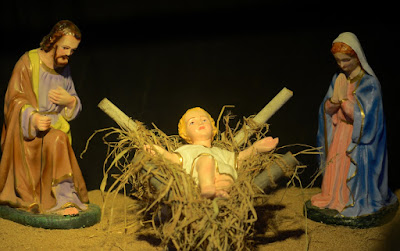 …or the later “Joseph at the Ready” version: 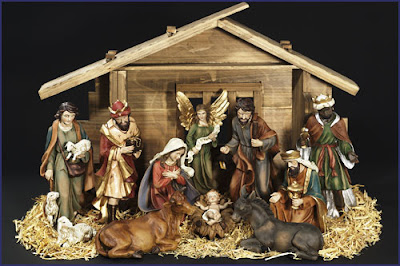 The subject of the Nativity has lost some of its fashion in favor of images of the Holy Family, but it remains at least a seasonally prominent subject.