Before I detail the uses made of St. Joseph in the Counter Reformation period, I want to look back briefly at the pre-Tridentine attempts to kick-start Josephite devotion. The following quotations are from Charlene Villaseñor Black’s Creating the Cult of St. Joseph: Art and Gender in the Spanish Empire (Princeton University Press, 2006), which I will also be referencing somewhat obliquely throughout this post.


After centuries of such obscurity, the cult of St. Joseph rose to prominence in the late fourteenth and early fifteenth centuries. In Italy, St. Bernardino of Siena (1380-1444) preached sermons praising Joseph’s special privileges (derived from having lived with Jesus and Mary) and asserted that Joseph was next to the Virgin in importance in the pantheon of saints. Perhaps the most significant figure to promote devotion to Joseph was Jean Gerson [died 1429], chancellor of Notre Dame and the University of Paris. At the Council of Constance in 1416, Gerson urged the institution of a feast day honoring the Betrothal of Mary and Joseph, for which he wrote an office. In a sermon delivered on the birthday of the Virgin Mary, he extolled Joseph as Christ’s earthly father. His three thousand-line Latin poem, the Josephina, laid the foundations of modern Josephine theology....

Whereas Joseph had previously been regarded as a subsidiary figure, old and unimportant, they asserted that, as the head of the Holy Family, the saint had to have been young and robust in order to support, protect, and exercise authority over Mary and Jesus. Gerson further proposed that, like the Virgin, Joseph was assumed into heaven after his death. (23-24) 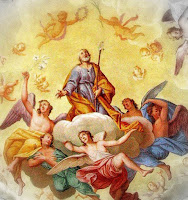 As far as I know, Bernardino and Gerson are the first theologians to posit Joseph’s bodily assumption. In 1522, shortly before the Council of Trent, the Milanese Dominican Isidoro de Isolani wrote his Summa de donis sancti Joseph (Summa of the Gifts of St. Joseph), which had a strong Gersonian influence, also positing an assumption among other things. After the quasi-iconoclastic movements of the Counter Reformation wiped the slate clean on Josephite hagiography, Bernardino and Gerson were dusted off and further exploited by the Molanusian reformers.

The other great promoter of Josephite devotion was St. Teresa of Ávila (1515-1582), who was healed of paralysis by St. Joseph’s intercession. Her influence on the Carmelite order ensured that the new Josephite devotion would be spread wherever Carmelites held sway; most especially in the Hispanic world, but also through evangelist-saints like Francis de Sales (1567-1622) who found inspiration in Teresa’s writings.

Propaganda for the Family


How did the new version of St. Joseph find such purchase in the Catholic world? Largely because of the rising devotion to the Holy Family, and its ties to preaching about the importance of family life. Treated often as second-class citizens in a kingdom ruled by eunuchs, the married laity of Catholic Europe were happy to see an emphasis placed on the Holy Family. The Tridentine Fathers understood that marriage was in a particular crisis, so in addition to requiring an ecclesiastical witness to all ceremonies, the Council’s reformers preached heavily on the exaltation of the sacramental married state.

Rather than pulling from the examples of married saints from Scripture and Tradition (many of whom found their cults demoted if not demolished by the Counter Reformation), the Holy Family devotion was developed as a teaching tool for the married, with St. Joseph as its newly-reimagined moral and spiritual leader. Artists were encouraged to paint the Betrothal of the Virgin to St. Joseph; depictions of the everyday life of the Holy Family, especially in Joseph’s workshop, became popular; and the traditional images of Christ Enthroned on Mary were quietly being replaced with paintings of Joseph holding and playing with the Christ Child.

Joseph was portrayed as the perfect model for husbands and fathers: young, hard-working, chaste, paternal, affectionate to his wife and child, and faithful. Surely young men in the married state need such examples, and Joseph was reinvented to suit that need. Mary’s wifely role was emphasized, as well: maternal, chaste, obedient, supportive, and prayerful. Even Jesus’ role as a good child was elaborated: obedient, hard-working, submissive to his elders, and playful.

Most of these things may have been true about the household in Nazareth, but there is no doubt that the newer elaborations are imaginative and based on no traditions. Indeed, what few ancient traditions there are about the Holy Family suggest an imperfect harmony at best. The Holy Family of popular devotion was carefully crafted by the Counter Reformers to suit a particular need, and artistic depictions were often stringently censored to that end.

It was important to show Joseph at his workbench, usually teaching the young Jesus how to work wood at the same time. The Spanish Empire reportedly had a difficult time dealing with a lazy populace, and promoting St. Joseph the Worker helped encourage men stuck in low-class labor to see work as a form a prayer. This aspect of Josephite devotion finds modern perpetuation in the teachings of Josemaría Escrivá de Balaguer through Opus Dei, and it was also exploited by Pius XII by instituting the May 1 feast.

The royal lineage of Joseph, as a descendant of King David, was frequently brought to mind as a way of exalting his worth. He was a patriarch, a prince, heir to the throne of David. Some new devotionals suggested that the Holy Family lived in intentional poverty, since Joseph had given all of his royal inheritance to the poor. The Coronation of St. Joseph was a popular artistic theme in Spain and Mexico, mirroring very closely the Coronation of Mary.

More questionable than Joseph’s royalty was the emerging iconographic subgenre of the Earthly Trinity, which mirrored the three members of the Holy Family with representations of the Trinity in Heaven. Even the Spanish Inquisition found this subgenre semi-blasphemous, but surely it was the fullest expression of this unjustified exaltation of the spouse of Mary, and what artist could resist painting a mirror image of threes? It lent itself to a kind of symmetry rarely seen since the old iconography died away.

The rise of devotional propaganda was serving a real need in the Church. Family life was in chaos, and pastors wanted a focused example for preaching and commissioning art, something that could appeal to the poor as well as the rich. It must have seemed like a useful shortcut to have one condensed example of familial piety with the Holy Family, and clerics everywhere attempted to spread this devotion among the families they were trying to save.

Meanwhile, the old cults were shrinking and dying, often with the assistance of newly-scrupulous clergy who wanted nothing that smelled of fiction or imagination in Catholic devotion. John the Baptist, previously invoked in defense of marriage, was forgotten as Joseph took his place as the highest saint below Mary. The parents of the Virgin, Sts. Joachim and Anne, were diminishing as theologians questioned their historicity. Many of the saints once invoked against unhappy marriages—Monica, Helena, Henry and Cunegundes, Gengulphus, Rita—were falling by the wayside.

It’s an unfortunate fact that shortcuts lead to problems down the road. A hastily-built house may fall apart one day because of the shortcuts taken by the builders. A concocted devotion founded on speculative fabrications will not inspire a lasting change in the Church. The more St. Joseph is forced into a superhuman mold, the more it feels like fantasy, and one even more fantastic than the golden legends of old. We shouldn’t reshape saints simply based on a perceived need in the life of the Church.

And really, doesn’t the more ancient belief in Joseph’s pre-Marian marriage with children make him more relatable to married men today? A neat and tidy household with only one child seems more like the marriages of the workaholic, compulsive, fecundophobic neo-pagans of today, and less like the messy, crowded families traditionally promoted by the Church.

Next time, we will move further into modern times, and look at recent papal writings and proclamations about St. Joseph.