The Nativity of Mary in the Proto-Gospel of James

This is a feast day shared by all the churches on 8 September, nine months after the feast of the Immaculate Conception. What follows is the oldest written account of her Conception and Nativity, from the Proto-Gospel of James:

And, behold, an angel of the Lord stood by, saying: “Anna, Anna, the Lord has heard your prayer, and you shall conceive, and shall bring forth; and your seed shall be spoken of in all the world.” And Anna said: “As the Lord my God lives, if I beget either male or female, I will bring it as a gift to the Lord my God; and it shall minister to Him in holy things all the days of its life.”

And, behold, two angels came, saying to her: “Behold, Joachim your husband is coming with his flocks.” For an angel of the Lord went down to him, saying: “Joachim, Joachim, the Lord God has heard your prayer. Go down hence; for, behold, your wife Anna shall conceive.” And Joachim went down and called his shepherds, saying: “Bring me hither ten she-lambs without spot or blemish, and they shall be for the Lord my God; and bring me twelve tender calves, and they shall be for the priests and the elders; and a hundred goats for all the people.”

And, behold, Joachim came with his flocks; and Anna stood by the gate, and saw Joachim coming, and she ran and hung upon his neck, saying: “Now I know that the Lord God has blessed me exceedingly; for, behold the widow no longer a widow, and I the childless shall conceive.” And Joachim rested the first day in his house.

And on the following day he brought his offerings, saying in himself: “If the Lord God has been rendered gracious to me, the plate on the priest's forehead will make it manifest to me.” And Joachim brought his offerings, and observed attentively the priest's plate when he went up to the altar of the Lord, and he saw no sin in himself. And Joachim said: “Now I know that the Lord has been gracious unto me, and has remitted all my sins.”

And he went down from the temple of the Lord justified, and departed to his own house. And her months were fulfilled, and in the ninth month Anna brought forth. And she said to the midwife: “What have I brought forth?” And she said: “A girl.” And said Anna: “My soul has been magnified this day.” And she laid her down. And the days having been fulfilled, Anna was purified, and gave the breast to the child, and called her name Mary. 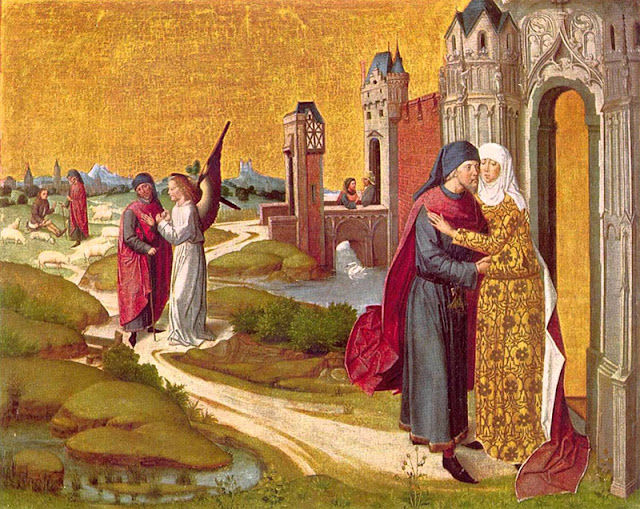