Emails from the Abyss 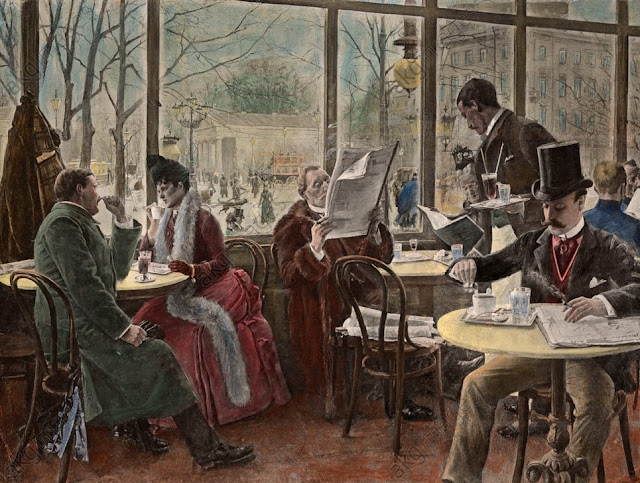 Trying to avoid the swarm of bicyclists at Café Preténse, I waited until the afternoon to hunt for a cappuccino. A few dozen college students had the same idea. I managed to toss my things onto an unoccupied table without anyone noticing before I stepped in line.

“One microwaved croissant for Jay!”

I sat and began waiting for my order to arrive. I was fiddling with some lace-ridden thing meant to be sold in the Liturgical Boutique when His Traddiness walked in. I waved him over.

“Any sign of our devilish friend today, Mr. Grump?”

“Not today,” I said. “It’s mostly the young and chatty this afternoon.”

After putting in his order for a cup of tea and a cupcake, His Radness sat down and opened his laptop.

“So, what came through with the emails?” I could barely contain my excitement. “Anything juicy about how they plan to subvert us from within, exploiting our minor faults in order to keep us distracted from correcting our major sins?”

“It’s rather more banal than that.” He opened his laptop and began clicking away.

“There are a lot of spreadsheets, memos, and reports. A lot of numbers and foreign terminology I didn’t understand. Some of it’s written in English, some in Latin, most in the Black Speech, I think.”

“I didn’t see much that looked like correspondence, either. I don’t think Wormwood is receiving any kind of regular advice from a higher-up demon, anymore.”

“That is disappointing. There’s nothing I like more than a bit of devilish correspondence.”

The cappuccino was frothy and sweet. The croissant was dry and crispy. His Traddiness informed me that the tea was standard and the cupcake superb. A large table of college kids dressed as hipsters emptied, and we took their spot. As I washed down the last shards of the croissant, I remembered that my companion had something to add.

“Oh yes. There were a couple of epistles worth reading. I had to run them through Google Translator to get most of the meaning, but I think I managed to salvage something useful out of them.”

He turned his laptop around, and I gazed hungrily into the screen. What I read there was only a drop to quench my thirst of curiosity.

What is this dreck you have sent me to drink? When my warden Boarbristle dredged me up out of the Styx to tell me I had received a package from my young nephew, I was excited. Ecstatic, even! “What small token of comfort has my dear, beloved nephew Wormwood seen fit to send me, his poor, unjustly imprisoned uncle in his time of need?” Such did I say to myself.

There was a bottle within, and a note. Both had been opened, of course. Boarbristle spat into the river and said, “Quite a poor sampling, if you ask me.” I picked it up and saw our family label—oh, what an illustrious product our family distillery has distributed over the centuries—but then I saw that it was such a briefly-matured line! All your note had to tell me was that this liquor was produced from recent acquisitions.

The smell: atrocious; sour and strong, with no hint of subtlety. The taste: drowning in sweetness in an attempt to overwhelm the bitterness. A hint of despair, laced with wrath, unbalanced with too much passive aggression, watered down with indecision. Are you bottling suburbanites?

I anticipated more from you. I will drink this as slowly as I can, but only to delay my inevitable submersion. I expect your next bottle to be of better quality.

Your affectionate uncle,
Screwtape
[Forwarded and censored as needed by Swinetooth]

“Not quite what I was expecting.” I suddenly realized that my cappuccino was getting cold, and proceeded to sip it.

“There’s another interesting one“—His Traddiness rotated his laptop, clicked a few things, and spun it back—“here.”

I put my espresso down and began to read.

I trust that production is increasing for the family label, but especially for the Wormwood’s Abyss line. I know that quality has not improved lately, but we do the best we can with the quality of human souls we receive. Gone are the days when we could fill our cups from the outpourings of the trampled grapes of wrath.

You have qualms about this, I know. But what is a producer to do in times like these? The quality labels have all but vanished because of the scarcity of those souls. We must make the best out of this bloat of tasteless quantity.

We might start some casks smoked with the insane, for their hallucinogenic properties. I can foresee a time when all of Hell is tipsy with the fumes of perverted banality. We will exchange our stately drinking halls for the craggy wastes, and forget the glorious flavors of yesteryear. Better to be drunk on vapidity than to weep for the subtle vintages of old.

Still, be certain to store our best, rare souls carefully. There may come a time when we have a large enough hoard that we can produce a truly great spirit fit even for Our Father Below.

“It seems that the devils are in a poor state,” I concluded.

“But not dying of thirst. It must be hard for them to lower their expectations. Good taste is hard to come by, up here and down there.”

“Speaking of which, I have a bottle of port recommended by M—. Shall we return to your place and partake after a couple of cigars?”

“We shall. Don’t forget that Cubans will be legal soon!”

“Maybe the pope can speed things along. We will smoke the first acquisitions in honor of Franciscus.”

We finished our caffeinated cups and absconded to more stately environs. 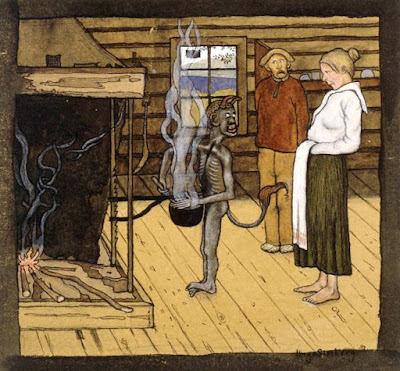