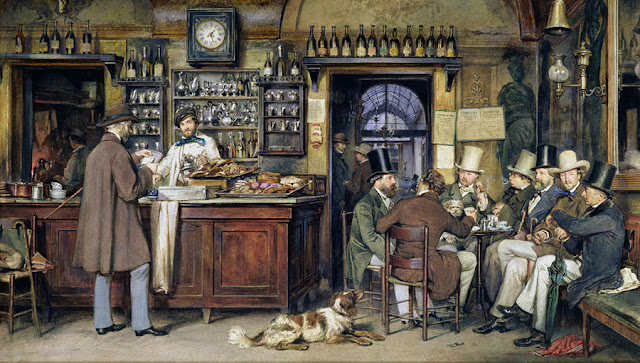 It was another sunny Texas Sunday morning when I last made my way into Café Preténse. The parking lot was far from being full, but a swarm of bicyclists had overrun the sidewalk, and a line of them stretched from the counter almost to the front door. They were talking excitedly from the adrenaline, and overwhelming the café’s usual espresso scent with their own.

By the time I made it to the counter I had almost decided to leave for a Starbucks. Where would I even sit?

“What can I getcha?” asked a college girl with too many colors in her hair.

“Better make it to go,” I said, looking around the building. “Just in case.”

“One cappuccino for Joseph.”

She ran my card, and I wondered if the couches in the back area might have an empty cushion or two.

I took my receipt and pushed my way through spandexed bikers to the back area. It was low-lit and close to the unisex bathrooms, but one teenage girl sat on each of the three couches, all of them talking animatedly. I considered sitting down beside one of the infantile women to make a point, but then I recalled that I actually wanted to read.

This place is getting on my last nerve, I texted to His Traddiness.

Ditch the burnt coffee scene and join me for another glass of Chartreuse, he retorted.

Green. I am convinced that this yellow monstrosity was invented by the Franciscans.

After I’m properly caffeinated. We’ll see if I get a seat. Still cranky from the sermon this morning.

Leaving the couches behind, I made my way up front. Every table had an occupant, every padded chair comfortably employed. If nothing cleared before my name was called I would leave and shake the coffee grounds from my sandals. My eyes wandered to and fro, and finally met with those of another customer looking up from his laptop while taking a sip from his mug. He was a devil of one of the lesser orders, and he nodded to indicate I should walk over. I did.

“You looking for a seat?” he said.

“Yes, thanks. You heading out?”

“Not for a while, but I have some space if you want to take the other chair.” There was indeed enough space for my books, my drink, and my self. “I don’t mind sharing a table with a fellow coffee aficionado.” He looked and dressed like Matthew Goode (circa 2008), except for the horns. I decided he was less likely than most of the people in this café to steal my books if I stepped away for a phone call.

“Cappuccino for Jay Grump!” the baristi with the technicolor dreamhair bellowed.

When I returned to the table, Wormwood was reading the back matter of my book.

“Thinking of joining our lower ranks?”

“No, just interested in being able to spot this sort of thing when it appears. I’ve suspected many of these authors of occultism before, but this just confirms it.”

“Hmm, it’s all true enough. We didn’t catch all of them in the end, but plenty have long been drained dry by Our Father Below. Victor’s fateful séance was a real show to remember.”

I took a sip and decided to change the subject. He was beginning to look nostalgic.

He tossed the book in front of me with a flourish. “Guilty as charged! I tell you, the doors that book has opened for me! Slubgob leaked my uncle’s letters to the human world after the two of them had a falling out, and got poor Uncle Screwtape tossed into the Styx for about a century without parole. For my part, I was released from my uncle’s dungeon and allowed back into the Tempter Rolls. If all goes well, I’ll be teaching in the Tempters Training College in no time.”

“You must be busy these days. The world does seem to be falling apart.”

“And isn’t that just delightful? Don’t you just experience a wonderful, sick thrill at the thought of it? Don’t it just make you smile on the inside?”

I glared at him and sipped my drink. It would have been better in a mug than in this waxed paper cup.

“I am busy,” he continued. “I’m part of a team working on your parish. A lot of the usual temptations: sexual deviancies are easy to encourage”—he made an obscene gesture—“as are anger and certain forms of despair. But let me tell you, the best thing to do is to widen divisions and encourage fathers to provoke their children to indignation. Bitterness is rich soil for despondency, rebellion, and apostasy. Tie heavy burdens on the shoulders of the faithful, force them to march through a slough, and then chastise them harshly for complaining. I swear, if I can turn even a third of your waters into wormwood, I will destroy your parish beyond recognition.”

He sat back with a contented look and breathed out a series of perfectly shaped smoke rings, even though he had been puffing on no tobacco. My phone buzzed, and I welcomed the distraction.

Just realized that wormwood is a major ingredient in absinthe, texted His Traddiness. We should try mixing it with more sulfur to see if it brings out that hellish flavour.

“Well, Mr. Wormwood, this has been enlightening.” I replaced the lid on my cup and tried not to look in his eyes. “I should probably head out. I don’t think I’m going to be able to read much with all this commotion.”

“It is downright pandemonious, isn’t it?” He sat up straight. “My goodness, I need to learn to not monologue when I’m talking to prey. I just enjoy the look in their eyes when they see me coming for them, you know? Oh, and do you mind watching my things while I use the facilities?”

I nodded my assent without making eye contact, and he clomped off, his tail trailing just above the ground. Once he was behind locked doors I shifted over to his chair and began skimming through his emails. It was a simple enough matter to set a forwarding email address to all his messages. By the time he returned I was back on my side of the table, stuffing my receipt into the book and skittishly sipping my drink.

“Certain things just take longer when the waters are bitter.” He laughed, and I pretended to laugh with him. He raised his mug. “Well, my amphibious friend, let us toast before you move on to your day’s business.”

“To the elimination of lukewarmness. May the undersexed morons who blunder into online pornography shops be turned into insatiable, defiant adulterers! May the self-hating drunkards who slur the name of The Enemy be turned into inflamed, rebellious, and sober blasphemers! May the flabby video gamers drive their cars over real pedestrians!”

“He that is filthy, let him be filthy still.”

We each took a sip of our now-tepid drinks.

Back in the car I put the remainder of my mediocre cappuccino in the cup holder and sent His Traddiness one last text before driving:

Much to discuss. Keep an eye on your email. Chartreuse at my place, I’ll buy the cigars. 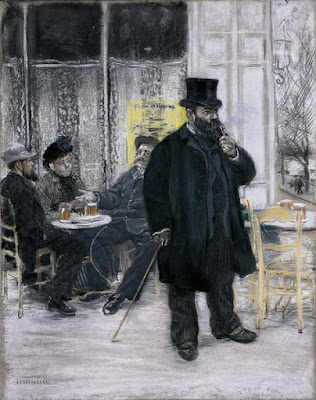