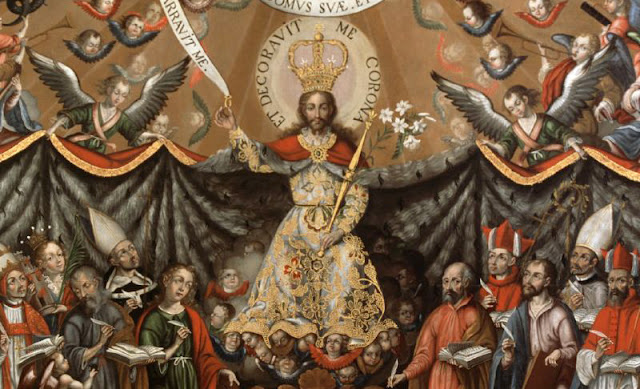 Back in May of this year, The Remnant organized a pilgrimage to La Salette, advertised specifically as an apparition site of St. Joachim’s son-in-law. A few weeks ago, a blog story about approved contemporary apparitions of St. Joseph made the rounds. Pope Francis won’t shut up about Joseph, even praising the sainted carpenter’s homeschooling skills. Some male friends of mine recently bought a house and placed it under St. Joseph’s patronage. And so on.

Why does the stepfather of Our Lord, particularly the fraudulently youthful version of him, appear to be regaining popularity? While I have no objection to the veneration of anyone raised to the altars, the devotionalism surrounding Joseph is awkward and anti-intellectually sentimental. What is it about New St. Joseph that attracts the adoration of men’s groups and doe-eyed mystics?

Firstly, I think the “Joseph the Worker” angle is very appealing to the modern man who finds it difficult to orient himself in the increasingly inhuman Western workplace. Opus Dei’s spirituality is too intense to appeal to everyone, but a more generic devotion to Joseph as a workman is attractive to those repulsed by Hispanic spirituality.

Secondly, New St. Joseph is palatable to young Catholic men trying to regain a sense of masculinity in a culture besieged by feminists and perverts. This version of Joseph serves as an ideal for young men looking for virtuous examples of saints living in the world as husbands and fathers.

Thirdly, the hatred of old age and idolization of youth continues apace. As Romano Amerio expounded upon in Iota Unum, the unthoughtful exuberance of youth is glorified in the modern world, while the calm wisdom of the elderly is belittled. The Hebrew proverb that said “Old age is a crown of dignity” has been forgotten, and the Church continues to idolize the young with its annual World Youth Day summer camps.

Fourthly, the Holy Family devotion is still a beacon of hope for those Catholics stuck in desperately poor family conditions, and this devotion falls apart without New Joseph at its head. As Catholic prelates continue to allow the Catholic doctrines of the family to burn while they light cigars on the flames, expect to hear much more from them about how devotion to the Holy Family can patch up everything.