* "Anything that can be put in a nutshell, that's probably where it belongs"--Will Rogers

Those blessed with a particularly good memory will recall that in the first part of this article, we traced the broad outlines of Modernism in art (especially painting). That movement--you may recall--had three very broad currents, usually referred to as Abstraction, Fantasy, and Expression. It was suggested, as well, that all art involves abstraction; however, what an artist chooses to abstract reveals much about the artist's understanding of the world around him.

Is there, in other words, a real affinity between artistic Modernism and ecclesiastical Modernism? And if so, did this affinity take tangible form in the approach to the Sacred Liturgy favored by Catholic Modernists?

IS THERE SUCH A THING AS MODERNISM? OR IS IT MERELY (AND IRONICALLY) A CONSTRUCT OF THE MIND?

We should make something clear before we begin. Modernism hasn't been spoken of for the past forty or more years in any major seminary. It was briefly and not without controversy sighted--like Sasquatch--in Dominus Jesus but quickly departed the Catholic intellectual scene without further comment. So, in this sense, it's true: there is no such thing as Catholic Modernism, in that no one mentions it or entertains any ideas about it in "respectable" circles.

Apart from that specious approach, there are not lacking those--even serious Catholics at times--who say that there never was such a thing as Modernism, not in any monolithic form. It was never like Marxism-Leninism with a single, internally coherent exposition and discipline. That's no doubt true enough. But I would counter that saying there never was an identifiable Catholic Modernism is akin to saying that there never was such a thing as a typical European nation-state: after all, how could anyone say that Poland and Monaco were states in the same way or according to some common, identifiable European character? But of course they shared a historical legacy that served to unite them (and the other states of Christendom) in a real way: i.e., their shared Catholic Faith.

In a similar way, there truly is a common element in all the modernisms that go about the world, including Catholic Modernism-with-a-capital-M. This common element (and this certainly is not original with me--far from it) has both a positive and a negative aspect.

The positive aspect is essentially the contribution of Immanuel Kant, a bit of a weirdo and yet full of a grim, sad academic ambition, to boot. Setting aside the many subtleties, caveats, and explanations that expand his writings to a discouraging length, his world-altering idea was that none of us observes things through the senses, learns about them, and finally knows them in themselves and in comparison to other things. That's all wrong, or better, all only apparently true. 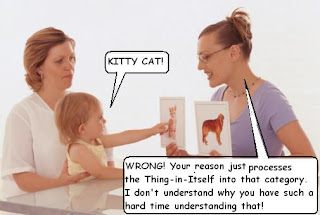 We are simply programmed, you see, to make judgments about reality ("a thing exists," "it has certain qualities," "it is related to other things in a certain way," etc.), but there is no innate connection between "what is really out there" and our judgments. In fact, says Kant, the thing-in-itself (formerly known just as "the thing") can never be known to us. However ... one thing about the thing-in-itself is knowable to us: the fact that it's unknowable. Somehow, the thing-in-itself that is our intellectual programming is knowable, too. Kant's whole philosophical edifice is about as stable as a barn in a Buster Keaton movie.


But much like young people in Martin Luther's time being told to "sin boldly," Kant's audience didn't worry too much about the details but began to avail themselves of the intellectual and spiritual opportunities offered by his Copernican Revolution (as he styled it). With religion in particular, it took less than a generation for various brainy types  (Hegel, Fichte, Schelling) to lay the groundwork for the idea with which our contemporary western world is saturated: God, insofar as He can be known, is only known within the mind or consciousness of an individual; there is no "objective, external" way to come to a knowledge of God, His existence or attributes, His will, or anything else stemming from those things.

OUT WITH THE OLD!

This--too brief and simplistic though it be--is the positive aspect of the underlying unity of all Modernists. But of course, there was a millennium of argument in contradiction to this "Revolution." As with any revolution, any opposition must be swept away. Hence, the negative aspect to any manifestation of Modernism: the attack on Tradition.

Kant and his followers contented themselves with disproving, or at least dismissing, the sections of St. Thomas that were most damaging to the new theories. He speaks of antinomies (or contradictions, in less pretentious language) inherent in the old ideas of causality, space, time, etc. Because the Angelic Doctor--poor thing!--presupposed unthinkingly such antinomies in his proofs for the existence of God (Summa Ia, q. 2, a. 3), his proofs (a.k.a. "the Five Ways") are fatally flawed. Of course, it's not difficult to disprove this kind of disproof. De-bunkers, from Christian Wolff (d. 1754) onwards, had in retrospect an embarrassingly limited knowledge of St. Thomas, let alone his more important Commentators, and so rendered superficial critiques of the Five Ways and almost anything else the Common Doctor penned. The point, of course, was to give like-minded souls a way to dismiss the crushing arguments of their most formidable adversary.

An even greater obstacle to the new approach to reality--and one that held sway not only in the Catholic Church but across the spectrum of Protestant sects as well--is the authority of Sacred Scripture. Although it's certainly worth reading about in greater detail, suffice it to say that the phenomenon that came to be known as Higher Criticism had as one of its principal aims the undermining of the authority of the Scriptures. The tools employed by such Higher Critics (linguistics, diction studies, internal comparisons, etc.) are always marshaled to this end: Scripture is not quite what it says it is (or, at least, what the Church teaches it to be).

For instance, the Pentateuch is not the work of Moses (with perhaps a few minor additions here and there) because it's actually the work of four, not authors, but groups of authors: the Temple priests, those who addressed God as "God," or as "Lord" (YHWH), or those who drew up Deuteronomy.  Similarly, Isaias wasn't written by Isaias (except maybe the first part) but by pious frauds--might as well come right out and say it--who called themselves Isaias. The same thing was visited upon St. Paul and St. Peter. And so on. Even if it was never said in so many words, the Critics were able to imply quite strongly that the truths of Scripture rested on (at best) long-held misconceptions or (at worst) deceitful and agenda-driven "editors."

And there you have the two unifying aspects of any manifestation of Modernism: an idealist distortion of reality (and our knowledge of it) and the attack on tradition (especially the traditional understanding of reality and knowledge of the divine).

You can actually try the following experiment at home! Consider anyone or any writing that you might suspect of Modernism: we can do a warm-up exercise with the local Director of Religious Education. Let's say, for the sake of argument, you find her conversation less than reassuring when it comes to the Faith. But, a Modernist? Well, let's see. Does her view of women speaking in church (St. Paul), the creation of the Woman from Adam, or the punishment of the licentious in Exodus involve her denial that the Scriptures are reliable on these points? Does she, moreover, use phrases such as "my God is not a judgmental God," or "that may be true for you but not for me"? If so, you might as well get out the big "M" rubber stamp and  plant a big red "M" on her forehead, because she is clearly in the Modernist camp.

This simple test is also useful for even a more nuanced, or at least controversial, figure such as Fr. George Tyrrell (a one-time Jesuit). For the sake of argument, let us assume that the following assessment of his thought is accurate:


To some degree, [Tyrrell] began to believe that [his] new insights undermined some of the Church's traditional beliefs, such as in the inerrancy of scripture. He became convinced that the Church placed too much emphasis on the ‘external’ manifestation of religion, with its system of norms and obligations, at the expense of what really counted: the inner workings of God in the individual soul.(Rev. Oliver P. Rafferty SJ, http://www.thinkingfaith.org/articles/20090706_1.htm)

Is doubt cast on the authority of Sacred Scripture? Check. Is there at least a hint of the idea that God is within the consciousness and not really accessible through reason? Sadly, yes. Can this summary of his views, especially the second sentence, be read in an orthodox light? Of course it can! But as with any wrong idea, the error will usually lie in what is denied, not necessarily in what is affirmed.

In short, these two pillars of Modernism--Kantian Idealism and the undermining of Tradition--may not describe everything present in the entire Modernist movement, but they are certainly sufficient to identify Modernist thought: anything from the defiant pronouncements of Loisy to the sly, disingenuous approach of the Nouvelle Theologie.

I realize that for our learned readership it is not necessary to rehearse yet again the history of how the early Modernists were hammered pretty hard and forced to take refuge in harmless pursuits such as the Sacred Liturgy and Patristic studies.  Consequently, it should not surprise us that the ideas they took with them as they escaped underground would seek a congenial--shall we say--mode of expression. After all, it would never do to promote (for example) the idea that "God" is solely within us by making use of the Baroque or Rococo. Consider:


If anything, the traditional Mass, celebrated in, say, a Baroque setting, draws those who assist out of themselves, all eyes being drawn to what is most sacred. Tradition stands witness to the truth of it all: the Saints (sometimes shown holding the Scriptures), those in Holy Orders, and the living tradition of vesture, architecture, and the rest. If you were a Modernist in those desperate days--I think you'll agree--you would dispose of this artistic inheritance post-haste.

Much more congenial to the Modernist "life project" (with apologies to John Paul II) regarding the Liturgy was the Post-Impressionist style then coming into vogue. Consider--if you would be so kind--another example:

Here the Cross isn't even the central focal point. The regular features of a church have largely been "abstracted" out of the picture altogether. And there is more than a little influence of German Expressionism:

But to see in detail exactly how the three main streams of Post-Impressionism, i.e. "Modern Art," were used to express the new approach to the Sacred Liturgy, it would probably be best to have a separate post. You've been more than patient to read this far, and in the words of the Lord Protector to the Long Parliament: "Ye have sat long enough!"