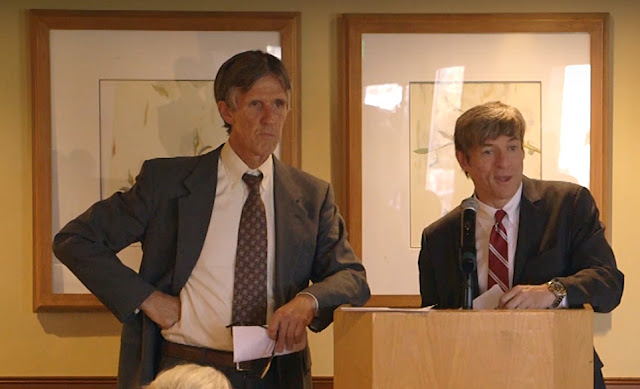 Continued from Part I, a critical examination of The Man Behind the Curtain: Michael Voris and the Homosexual Vortex by E. Michael Jones.

Was the New York Threat Real?

When Voris released his revelatory “Vortex” episode “Limiting God,” he claimed to be doing so because, in his own words, “We have on very good authority from various sources that the New York archdiocese is collecting and preparing to quietly filter out details of my past life with the aim of publicly discrediting me.” Jones states flatly, “This was not true,” and that “he began his Vortex with a lie” (ch. 8). However, earlier in the essay Jones strangely seems to say the opposite:

Marc Brammer got a call from Mark DeYoung, a seminarian at Dunwoodie, the same seminary which Voris had attended for two years during the ’80s. The current crop of seminarians at Dunwoodie were avid Voris fans, but they were being told that Voris had been dismissed for good reason and didn’t know who to believe. DeYoung had told Brammer during one of his trips to New York that the seminary officials were willing to release Voris’s dossier to the public if Voris felt the rumors were false. Voris had always maintained that he had not been dismissed because of homosexual activity but because of his spiritual immaturity, failing to understand that spiritual immaturity had become a code word for homosexuality. (ch. 6)

This may not have been the imminent threat of exposure that Voris thought, but it seems to be close enough to what he said in the “Vortex” that it substantiates the essence of his claim. The real threat, though, was not the archdiocese but the constant stream of accusations of a past gay lifestyle on social media sites by people who knew him in his earlier days.

E. Michael Jones believes himself to be an expert in psychiatry-from-a-distance. Even though his graduate studies were in English and American literature, he cannot seem to write anything that does not include the psychiatric diagnosis of mental disorders in some distant subject. His diagnosis of narcissistic tendencies in Mr. Voris depends heavily on Dr. Van den Aardweg’s The Battle for Normality, which is quoted (and, thankfully, properly cited) liberally throughout The Man Behind the Curtain. I have no problem with the Dutch doctor’s book, which I have not read, but his decades-worth of private practice have surely earned him the right to opine in general terms on the psychological aspects of homosexuality.

Sadly, Dr. Jones quotes Van den Aardweg like a fundamentalist quoting the Holy Writ: as a source of proof texts that he can apply to whichever subject he sees fit, on the barest thread of evidence. He takes the insight that homosexuality and narcissism are often tightly linked, and proceeds to diagnose Michael Voris with an extreme case of narcissistic tendencies in all aspects of his life. “Homosexual desires,” Jones opines, “are rooted in ‘self-centeredness or immature “egophilia,”’ which leads to ‘hyperdramatization,’ which conventionally goes by the term ‘narcissism’” (ch. 2).

In Dr. Jones’s view, both the deviant behavior and the preachy bluster of Mr. Voris find their roots in the common source of that narcissism which developed early in life as a result of rumored sexual abuse and the inability to connect to his schoolyard peers. Then Jones takes a surprising left turn to diagnose Mother Angelica with a similar case of egophilia, which supposedly is self-evident in her 1993 rant against a bishop who had cast a young woman as Jesus in a dramatic presentation of the Passion:

Mother Angelica, née Rita Rizzo, and Michael Voris were wounded children. Rita’s father walked out when she was six years old, at the start of the Depression, plunging the family into poverty and subjecting Rita to ridicule at the Catholic school she attended.... Both Voris and Rizzo sought solace from their childhood woundedness in the religious life.... [As far as I can tell, Voris entered the seminary, not the monastery, and Jones provides no evidence whatsoever that Rizzo entered the convent for the aforesaid reasons. –J]

Mother Angelica’s case was different. There is no evidence that Mother Angelica ever acted sexually on the wound she received in childhood. The discipline of pre-Vatican II convent life kept whatever impulses she might have had under control. During the ’70s, however, Mother Angelica was prayed over by an itinerant charismatic by the name of Robert DeGrandis and received the gift of tongues. This event eventually led to a more and more public life, until in 1981 she founded her television apostolate. Receiving the gift of tongues can often be accompanied by a reduction in inhibition, specifically sexual inhibition.... The fact that Mother Angelica never acted on the childhood wound sexually does not mean that the wound wasn’t there. The narcissism that flowed from it gradually found expression in her apostolate as well.... Why did both EWTN and CMTV end up in de facto violation of Canon 1373? The short answer to that question is narcissism. (ch. 2)

You read that right, gentle reader. E. Michael Jones implies that Mother Angelica was a repressed lesbian who channeled that repression into criticisms of the episcopacy. This is what comes of armchair diagnoses. The reason why those in the psychological sciences are very hesitant to diagnose even well-known historical figures with deficiencies or disorders is that they are unable to examine and cross-examine those persons in a clinical setting. To toss out mental health diagnoses willy-nilly as Jones does is to become the Catholic version of Camille Paglia.

Two can play at this armchair game. Let’s give it a try.

Jones accuses Voris of narcissism and “salacious” (ch. 7) reporting in his apostolate. As for narcissism, Dr. Jones spends a great deal of the first chapter talking about himself, specifically his influence on Terry Carroll’s views on the SSPX and how Jones really (really!) isn’t an anti-semite, even though it has absolutely nothing to do with the topic of the essay. Also, Jones wants you to know that he was definitely smarter than Mr. Michael Davies, and he thinks it was very funny when Mark Shea reacted to an interview of Jones on CMTV like a barking dog. It’s not until the second chapter that Jones begins to get over himself and writes about the topic of the essay.

As for the “salacious” touches and name-calling that frequently gets Voris in trouble, Jones himself calls Voris “Gary the Fairy” four times (a play on his full name of Gary Michael Voris), makes fun of his hair (something Jones and I can agree on), and quasi-subliminally suggests that the young men who work at Church Militant TV are in danger of perverse attack by quoting such warnings as, “The young don’t deserve to [be] spiritually sodomized in all this.... Voris is getting to f[—] these kids in a spiritual way” (ch. 7). Jones adds a flamboyant touch in one insult: “Even if Voris has been washed in the blood of the lamb [sic], Marc Brammer is still out $250,000” (ch. 9). Earlier he mocks the CMTV cruises by saying their clientele “was typical of fag/hag culture” (ch. 6). The ebook’s pedestrian photoshopping of Voris as a masquerader is indicative of Dr. Jones’s unsuccessful attempts at cleverness. And finally, Jones also goes on to repeat accusations that Voris was sexually abused by both parents, but in such a way that the reader can never discern if the accusations were actually grounded.

Looking at it from another angle, both Jones and Voris share the middle name “Michael,” and also share in the eccentric affectation of hiding their first names (the E. stands for “Eugene”). This is doubtless an effect of deep-rooted narcissism, stemming specifically out of a desire to redefine themselves in ways that rebel against their parents who named them. By rejecting their first names, they are rejecting the authority of their parents and sinning against piety and the Fourth Commandment. By taking the name “Michael” as their monikers, they are identifying with a saint who, in popular sacred art, is always depicted as both youthful and masculine—superficially, the ideal homosexual fantasy.

(Yes, this section is sarcastic, but it is almost exactly the kind of argumentation that Jones uses persistently throughout The Man Behind the Curtain.)

“Where Lies and Falsehoods...”

Jones clearly has a great deal of mental energy at his disposal, and the zeal to use it as he sees fit. One feels rather envious of this fact when skimming through his voluminous output. His choice of targets is sometimes perplexing, however, and his methods of argumentation crumble under their own weight long before the last page is read. I do not doubt that Michael Voris and his apostolate are worthy of a critical eye, but Jones is incapable of avoiding self-serving sophistry while dishing out his accusations.

The problem of exploiting Voris’s spiritual advisor is the most egregious herein. If Jones published through a separate publishing house he would never get away with that sort of temerity. Because of this, it was almost physically painful reading this essay to the end.

But at least he’s not an anti-semite, right?