After the Reformation Appendix: Exsurge Domine 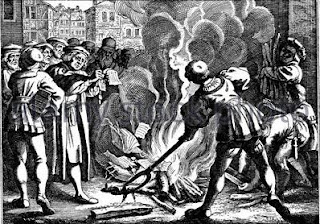 As the 500th All Souls' Eve since the outbreak of the Reformation approaches, it is worth remembering Leo X's bull Exsurge Domine, which offered Luther the opportunity to recant his positions in Rome after listing numerous condemned propositions of his. Beyond the pale of the pastoral opening to the document, the pope's concern for "pious ears", and the generally practical nature of the bull (the mendicant order priors who served as ghost writers went about it the right way), what is most stunning are the statements of Luther, extracted from his tracts, sermons, and pamphlets, that actually required condemnation. One reads them and wonders if Luther's scruples resulted from an inner psychosis that required the world to be logically consistent with his own talents and short-comings. Perhaps in modern psychology Luther would fall somewhere on the Autism spectrum; in this regard he is not unlike the assiduous and scrupulous St. Teresa of Avila, whose life ended in a remarkably different fashion.

Among the ideas Leo condemned are:


Dissenters, at least the honest ones, will admit that what they find objectionable is rarely something they detest in a vacuum. More often than not, religious dissent, like political rebellion, is born out of restrictions existing systems put on one's manner of life. What restrictions did open contrition for sin, good deeds, resisting the Turk, and Conciliar doctrines place on Brother Martin?
Posted by The Rad Trad at 12:43 AM