After the Reformation VI: the Baroque


One of the more debated points in the reemergence of the traditional Latin Liturgy is whether the Baroque is the ideal artistic vehicle for the expression of the traditional Mass. I use "ideal" advisedly, because, while some may tolerate or even have a certain affection for the Gothic or the Classical Revival or even the arte moderne of the twentieth century, the exemplar sans pareil remains, for some, the Baroque. Contrariwise--I need hardly add on a blog that boasts a tongue-in-cheek Liturgical Boutique--some will tolerate the Baroque but prefer the Gothic, in all its manifestations, and lament that it has been so unjustly dethroned by the Baroque.

But, what if the whole controversy is really a lites vocum, a mere dispute about terms? What if the Baroque was simply the exotic flower that budded forth from the no less exotic rod of the Gothic? Granted, here we take "Gothic" to mean the Late Gothic, sometimes referred to as "Flamboyant" (or in England, the Perpendicular).

In other words--in the illustration above of St. Paul's, Antwerp, from the good ol' days--does the Baroque altar piece, with the elements it obviously borrowed from the so-called Renaissance, represent an awkward break with the soaring Gothic vaulting and arches surrounding it? Or rather, does it, like the Gothic before it, simply incorporate and transform elements of the classical tradition, so that the broken pediments and doubled columns are made to soar upward like those glorious Gothic arches?

The Argument from Architecture

If we turn briefly to architecture, we must keep in mind that no one is arguing that the Baroque and the Gothic (even the Late Gothic) are essentially the same style. They are, of course, decidedly distinct. What is being proposed--at least for your amused consideration--is the possibility that there was a seamless transition from the one to the other.

First, let's dispense with a somewhat shopworn idea about the Baroque, namely that the Gesù in Rome is the First Baroque Church.
There is no doubt that elements that would later be considered typically Baroque made their first appearance at the Gesù, but too much insistence on this aspect ignores the plain fact--so plain that it's literally the focus of the eye in the above perspective--that the basic style is Renaissance. The pediment, for example, that forms the altar piece is not especially Baroque-looking; it's more in the Palladian style, like many other Italian Renaissance buildings. In short, it would be a mistake to take this first essay into the Baroque as the standard of comparison when we try to make a case for the Baroque developing out of the Late Gothic.


But on to the matter at hand! Let us consider a very late example of the Gothic: St. Anne's in Vilnius, Lithuania (from 1500): 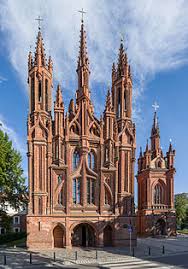 Abstracting from its, shall we say, Northern influences, one can say, without being too fanciful, that arches are being assimilated to pediments (over the three main doors and mid-way up the two flanking towers), while the pilasters and other architectural features of the towers more or less serve to frame the central, eye-catching façade of the nave.

A similar use of lines and focus is very typical of the Baroque as well:
Perhaps the affinity of the one style for the other becomes even more obvious once we enter inside. The altar piece of the cathedral of Toledo is necessarily labeled "Gothic" because of the time period and the style of its constituent parts: 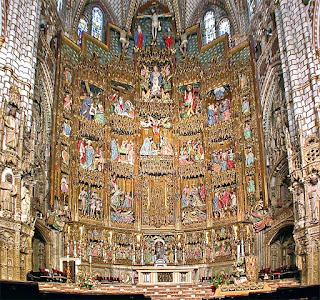 It nevertheless shares a certain esprit d'exubérance with another altar piece, one with a clearly Baroque pedigree: 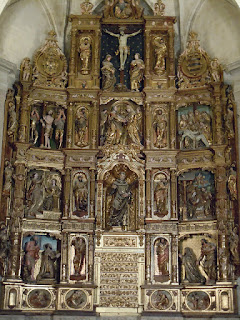 One might argue that the characteristically Spanish idea of the grand retablo is here simply rendered in two different styles: the Late Gothic and the Baroque. We can concede the point, provided that we recognize that doing so confirms our argument that both styles are capable of similar expression; both are of the same lineage, as it were. One can hardly imagine a similarly monumental retable in the Classical Revival style.

The Argument from the Pictorial Arts

It's a commonplace of art history that Gothic sculpture and painting gradually relaxed--some would say developed--the rigid canons of the Romanesque into a more expressive and lifelike idiom. Even by the High Middle Ages, sculptors were portraying the Saints with human expressions, as though to elicit the viewer's affection and confidence.

Although the characteristically Late Gothic S-curve is only subtly implied in the figure of Our Lady, the very human affection of the Child and His Mother--as well as the quiet devotion of the attending Angels--is beautifully represented. We might also note the use of flowing draperies to heighten the impressiveness and majesty of the figures, a technique the Baroque would use to full advantage. Simultaneously, with other subjects at any rate, the portrayal of emotion and humanity became quite prominent in the Late Gothic: 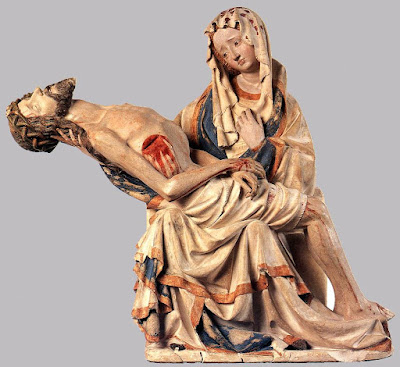 It seems reasonable to suggest that in the Baroque descendants of these types of artwork, there is a difference in degree but not in substance, albeit some stylistic details have certainly changed. Here is Our Lady of Victories, of seventeenth-century vintage, with impressive draperies and the S-curve very much in evidence; the tender affection of Mother and Child, though, is now replaced with the regal gravitas of the Queen and her Son, in warning, perhaps, to the new threat of the Protestant heresy: 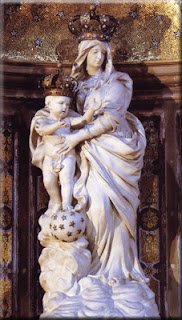 In the most representative examples, everything in the Baroque is directed toward the intense emotion to be associated with the dogma depicted, as in this world-famous stucco sculpture in Bavaria of the Assumption of the Blessed Virgin:

It probably should be noted that one thing the two Baroque sculptures have in common with each other and many other Baroque artworks is the sense of triumph, something rarely encountered in the Gothic, even in imposing scenes of the Last Judgment over many a cathedral's west door. Whether this emphasis on the Church's defeat of error and darkness is an adaptation of the Gothic genius or a new departure altogether is but another facet of the question we began with.﻿﻿﻿

The Argument from Music

Terminology is more problematic when it comes to music. Bach is considered "classical" music, but his output is more accurately categorized as Baroque. Handel seems, somehow, to be more commonly placed in the Classical category, and yet he was a contemporary of Bach's. At the other end of things, one rarely hears the term "Gothic" applied to the polyphony of the early sixteenth century, but the Gothic in other realms of art certainly extended into those years.

I would offer only a few thoughts for your consideration rather than, by trying to summarize too much, risk oversimplifying something as sui generis as music.
The great bond of continuity between these epochs--whatever we call them--is the plain-chant. "Renaissance" polyphony (simultaneous with Late Gothic painting and architecture) often made use of the "parody": the independent voices (or melodic lines) that combine to form the polyphony derive from some familiar tune. Often enough (though not always--hence the reform at Trent) that tune was from the chant, as for example in the Mass "Pange, lingua" by Josquin des Prez († 1521).

Similarly, the great J. S. Bach wrote several works on the chorale melody "Nun komm, der Heiden Heiland," usually translated "O Saviour of the Nations, Come," which itself is derived from the plain-chant hymn "Veni, Redemptor gentium," still in use after Trent in some Latin rites. Bach's preludes and other works derived from "Nun komm" added a great deal of flourish and extravagance (in the original sense) to the old-style parodies of the Late Gothic (or Renaissance, if one prefer). As with architecture and the pictorial arts, the Baroque influence retained something of the original inspiration while greatly amplifying the more imposing aspects.

Even the great Handel (admired by Mozart and Beethoven alike), whose predilection for striking homophonic passages is well-known--e.g., "Wonderful, Counselor," etc.,  from Messiah--concluded that great oratorio with a sweeping melismatic fugue on "Amen."

Even the quintessentially Classical Mozart in his later (more mature) years, turned to the heritage handed on by Bach and others, and he thereby gave us his most memorable and deeply impressive work, the Requiem. He makes use of chant melodies and psalm tones in that great composition, but apparently only by way of other German composers in the Baroque tradition (as some have argued).

This little survey is obviously very summary, and the examples have been narrowly chosen. If a certain probability has been established for the continuity of the Late Gothic and the Baroque, nevertheless certain questions remain unanswered. For instance, which elements of the Late Gothic were left behind by the Baroque, joined as it was to the efforts of the so-called Counter-Reformation? Did, perhaps, the humanity and tenderness of Late Gothic devotion fall into obscurity because of the new emphasis on the triumph of the Faith? Did the renewed interest in purely classical forms sacrifice too much of the Gothic's unmistakably Catholic and otherworldly idiom? After all, when the Baroque is most independent of its Late Gothic roots--say, at a Mass in Vienna's Karlskirche, Mozart's "Sparrow" Mass chirping away in the choir loft--that is when it most seems a rupture rather than a development.

Nevertheless, it's still worth considering that the Baroque, perhaps a little indiscriminately at times, embodies essentially the same exuberance and sheer joy in the beauty of our Faith as the Late Gothic that preceded it. 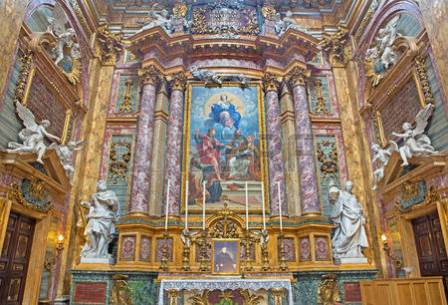