The busybodies of online Christendom are forever insistent on side-picking. In the eternal struggle between Them & Apollyon, there is little patience for those engaged in unhasty thought and deliberation, those who watch and pray, those who are not swift to judge and are willing to work within the established rules. Cdl. Burke has been viciously insulted by those who lack the capacity for longsuffering, and others who will not sign the correction for various reasons are despised for their tardiness. These gadflies do have a point that consideration must eventually lead into action, but not all action is wise even if it is well-intended, and not all delay is cowardly or lethargic.

Hasty action ends, more times than not, in regrettable situations. It ends in pro-choice conservative candidates. It ends with a charismatic young actor in the papacy. It ends in the trusted white wizard devastating your forest to fuel his war machines. It ends with hands covered in blood or a belly full of hemlock.

The whole Western world has turned activist. Long gone are the days when common folk could keep to themselves and fight only when fought against, or when forced to fight by their rulers. The half-educated are propagandists who exploit the wrath of the quarter-educated with crafty slogans and long-buried resentments. We are rending the Church apart over a footnote inserted by a devil, but have more than a few dozen across the globe even bothered to read Amoris Laetitia in its entirety? Who would even care to do so, when the next papacy or the one after that will overturn it? Our days would be better spent reading The City of God or even Tolkien's Silmarillion than the doorstops printed by the Vatican press.

Is the age of activism better than the previous age of passive clericalism? Perhaps in some aspects, but it is scarcely a lasting solution. The earlier sense of lay people that they were comfortably sheltered from the occasional madness of their betters by the mere fact of their lower station has been eroded by the artificial elevation of the laity. There is no escape from the news cycle, nor from the demand of busybodies that they must decide on Important Issues without delay and without sufficient education. Suspension of judgment is considered unacceptable when all people are required to choose between polar positions that did not even exist mere weeks before.

Lay siege to Isengard and imprison the mischievous wizard within, if that is necessary for the world's safety. Make sure that Wormtongue is captured as well. Enjoy the peace of good Shire tobacco while the enemy screams and withers away. 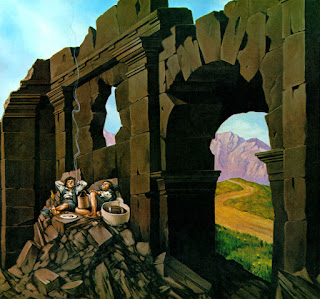 Email ThisBlogThis!Share to TwitterShare to FacebookShare to Pinterest
Labels: Pontifexit