After the Reformation VII: The Wrong Ecumenism 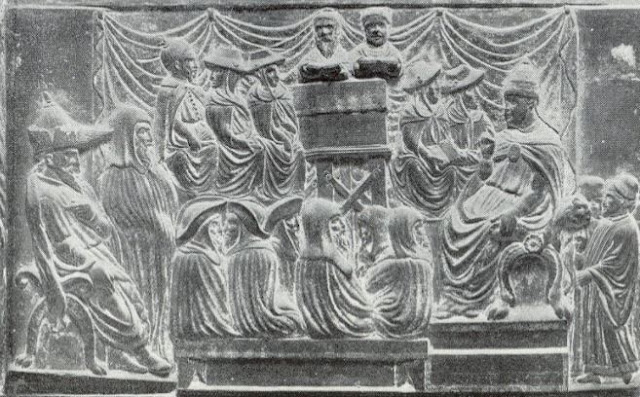 My articles in this After the Reformation series have focused on culture, politics, and social dynamics after Dr. Luther's little revolution 1517. My cowriter, J, has written more extensive on the theological impact, still lingering today, from the Reformation. But now the time has come to address, if only in a cursory manner, one of the most nefarious and lasting influences of the Reformation, the misguided "ecumenical" practices of the 20th century and the total disappearance of any real, tangible effort to reunite with the dissident Eastern Churches.

The Church routinely suffered schisms in the first seven centuries. During the pre-Nicene era, schisms would often pit two bishops against each other within a city when a theological dispute became a pretext for deeper, personal disagreements to manifest themselves. This was certain the case during St. Cyprian's time in Carthage. As the early ecumenical councils proclaimed binding statements of faith groups rejecting the conciliar anathemas severed themselves from the Church while retaining a Sacramental tie. In the age of St. Athanasius and the second wind of the Arian heresy, Arians retained any number of churches in a city while Catholics held the others. Doctrinal dispute bifurcated the loyalties of cities while true Sacraments remained within the parishes. The Sacraments, the mysterious and enduring presence of Christ enacting His grace on earth through symbols, bind the Church together as glue. If anything, the presence of valid Sacraments outside the visible Church is an act of violence against the Church in need of amelioration.

Often enough time and good judgment did heal schisms (the schism of the Lombard countries and Aquileia during the "Three Chapters" controversy and the enthronement of Photios in Constantinople while Ignatios still breathed), but not always (Eutyches' hoodwinking of the Alexandrian Church and the ensuing Uniate-ish Greek patriarchate erected in the city). While some schisms were more hardened than others due to matters of faith, no major schism effected an entirely novel way of being a Christian or severed Sacramental validity. Moreover, there was no reason to think any given schism would be permanent. Even the misnamed "East-West Schism" was met with two unionist councils, Lyon and Florence, which may have had more lasting fruit if not for the fall of Byzantium and the rebuke of the reunion in 1471 under Ottoman rule.

Within the context of fifteen centuries of schisms and occasionally resolutions among churches maintaining Sacramental unity and ties to Apostolic origins, the statement of Lumen Gentium "the Church of Christ subsists in the Catholic Church" would seem a friendly if all too eager statement. In reality, it was an act of outreach to religious patterns with shared none of the aforementioned characteristics of traditional Christianity which held attached separated groups, at one level or another, to the Catholic whole. The premise of this statement is hopelessly caught up in the ignorance befitting a 1959 sociology seminar at a German university, with atheism on the rise and Roman Catholicism along with Reformation-era protestantism presumed to be the two forms of Christianity. However, 20th century Roman Catholicism does not even reflect the entire Latin Catholic tradition, much less all traditional forms of Christianity.

In short, the Reformation created a new way to be a Christian in common society displaced from the differences of singular doctrines which split parishes and episcopates a millennium earlier. In the years following 1517 established Christian institutions negotiated the new paradigm with great difficulty. The cathedrals and Strasbourg and Cologne had both Catholic and heretic canons for a time with the former even being assigned heretical services for a century by the city council. University faculties, particularly in Germanic countries, were similarly split. It was in this context that concepts of religious plurality, association betwitx Church and State, and ecclesiology developed after the Tridentine Council all the way up to Vatican II and Lumen Gentium. Since the Rhine flowed into the Tiber during the 1960s, and does again during the Bergolgian years, one can only interpret Lumen Gentium and the ensuing movement of derranged ecumenism through the narrow duality of Latin Catholicism and Protestantism. Ecumenists content themselves to invite Orthodox Christians to their silly events, provided they bring their funny hats, and dicastries in Rome will praise the Eastern Catholics Churches for being the other "lung", but any serious observer of Church history sees these moments as what they are: ignorant tourists pointing out things in a menagerie.

As protestantism becomes less relevant and more fissiparous, we would do well to rediscover the historic outreach to our "separated brethren" who are indeed alienated children of the same spiritual fathers as our ancestors did with the Eastern Churches before the Reformation. Perhaps then we can credibly pray for "peace throughout the whole world, the welfare of the holy Churches of God, and the union of them all."
Posted by The Rad Trad at 12:52 AM