I have decided to branch beyond the Catholic offerings in our special on Dallas area churches. Today we are featuring Holy Trinity Greek Orthodox Church in northern Dallas, which is diagonally across the street from Holy Trinity Ethiopian Orthodox Church. I intended to feature the stereotypically megachurch Prestonwood Baptist Church at some point, but time might make that impossible.

Holy Trinity is by far the most impressive structure I have encountered in the area. The mosaics outside are in the style of Byzantine iconography, yet the Spanish Roman Catholic style of the exterior give us hints as to what first millennium Roman artwork may have looked like. 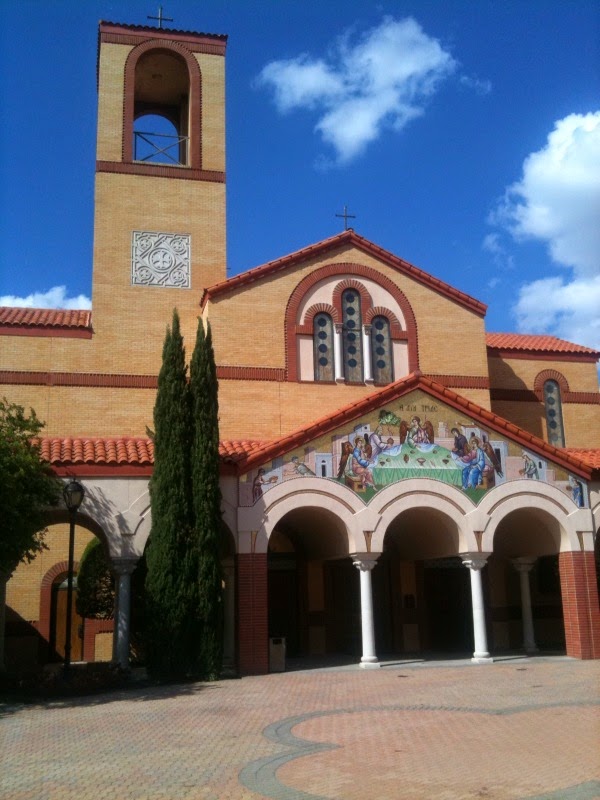 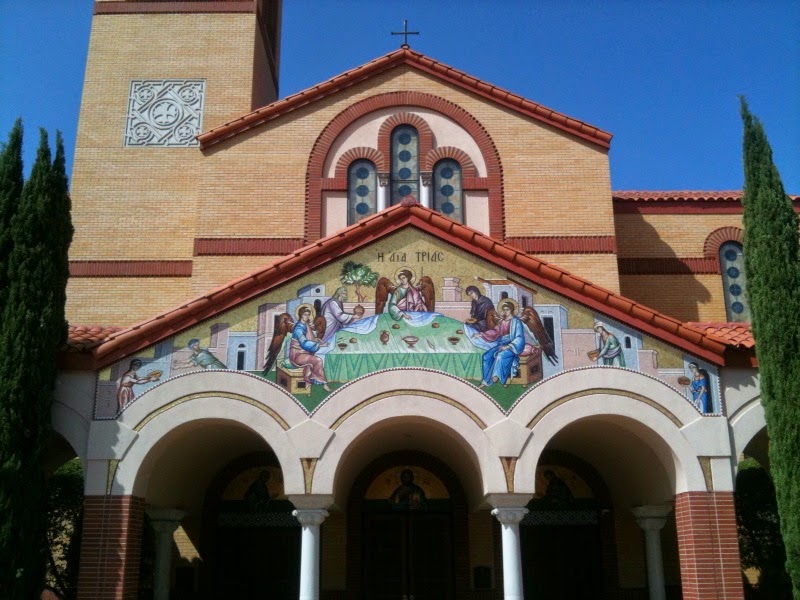 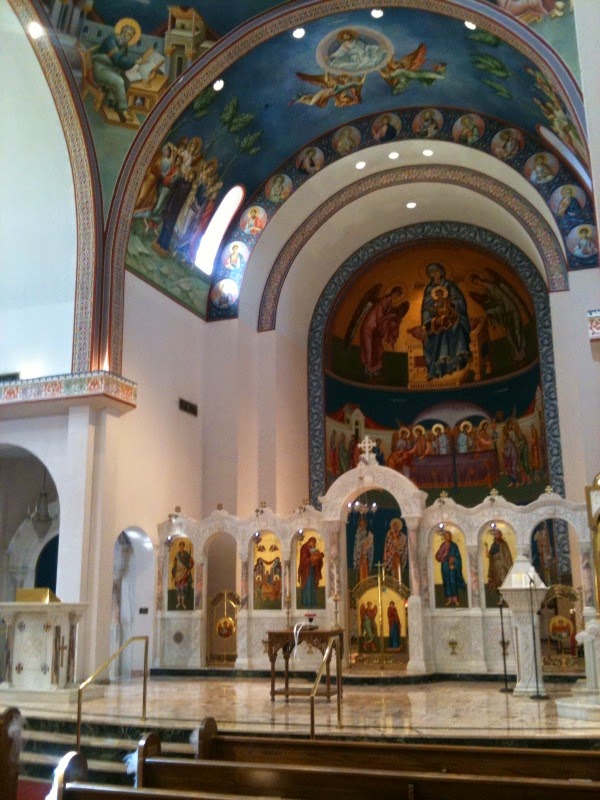 The iconostasis is stone and white, which creates something
of a washed effect that I do not particularly like. However
the apse is colorful, imposing, and quite impressive.

The tetrapod is being used for an impending wedding, hence
the "common cup" of wine which the new weds drink
after their nuptial to symbolize their union. 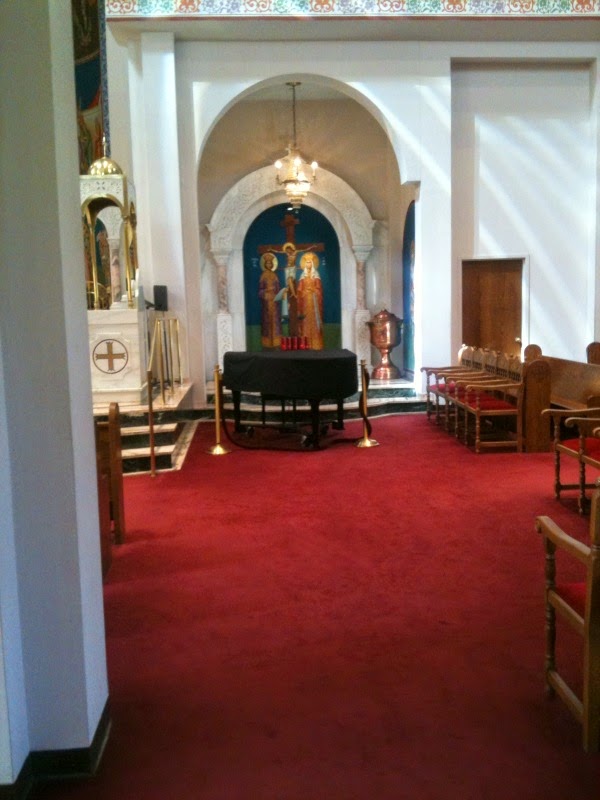 The place is not without its quirks. The cantors do a fine job,
I am told by a former parishioner, but the polyphonic choir
requires a pianist to stay on key. 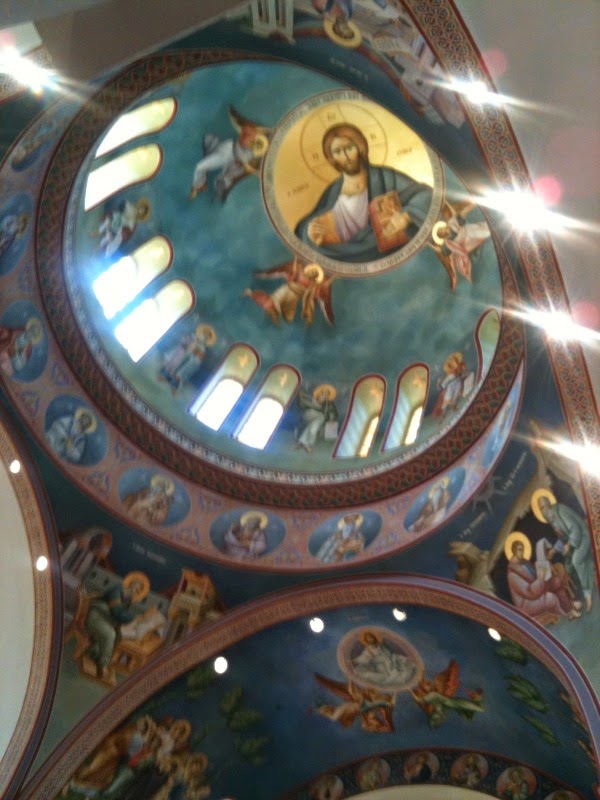 Christ, ruler of the world, looks down upon His people
holding the book in which all is written and surrounded
by the heavenly hosts singing the Thrice Holy Hymn. 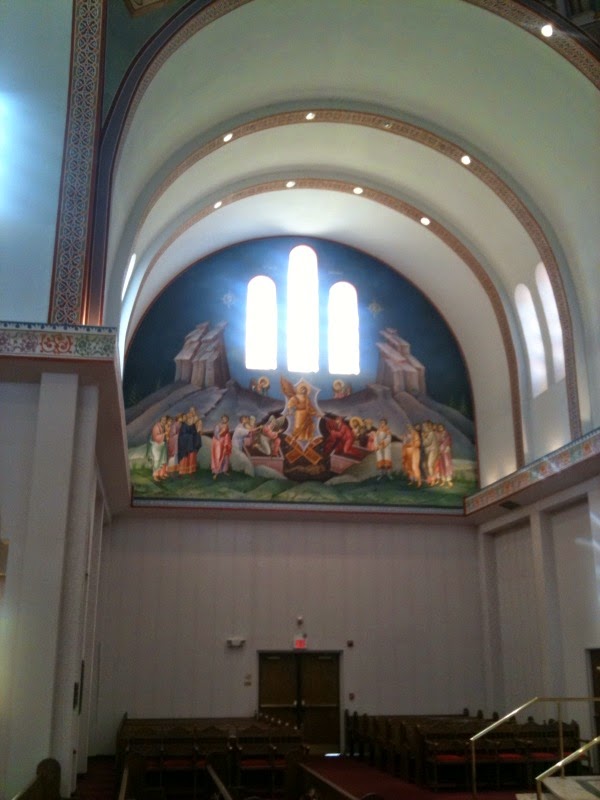 The south transept depicts the Resurrection. 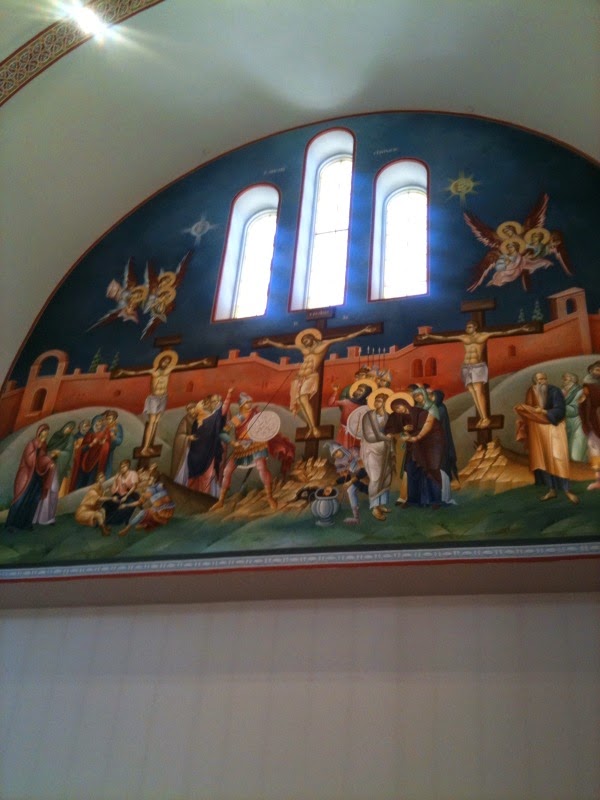 The north transept depicts the Crucifixion. 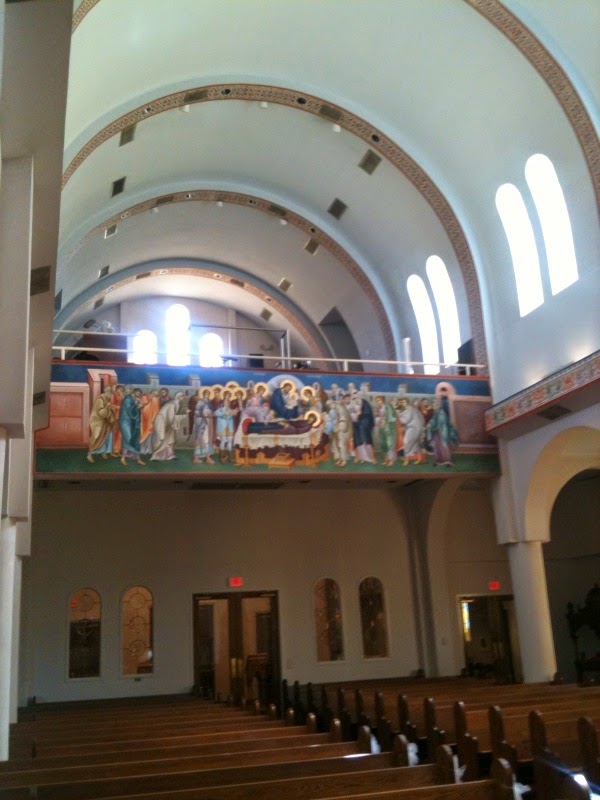 And the choir loft.

The nave is quite luminous and the white walls and sun
bring out the color in the icons very well. 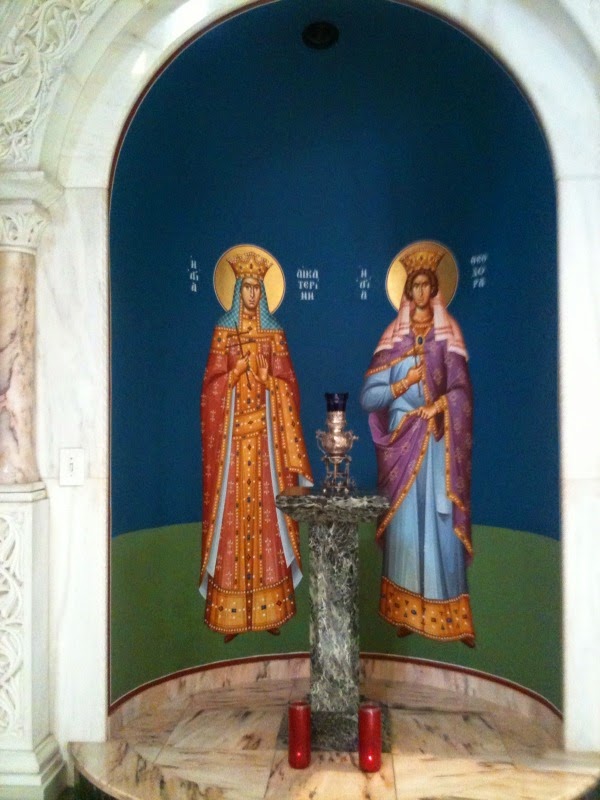 Constantine and Helen. Personally, I have always found the
canonization of Emperor Constantine more than a little troubling. 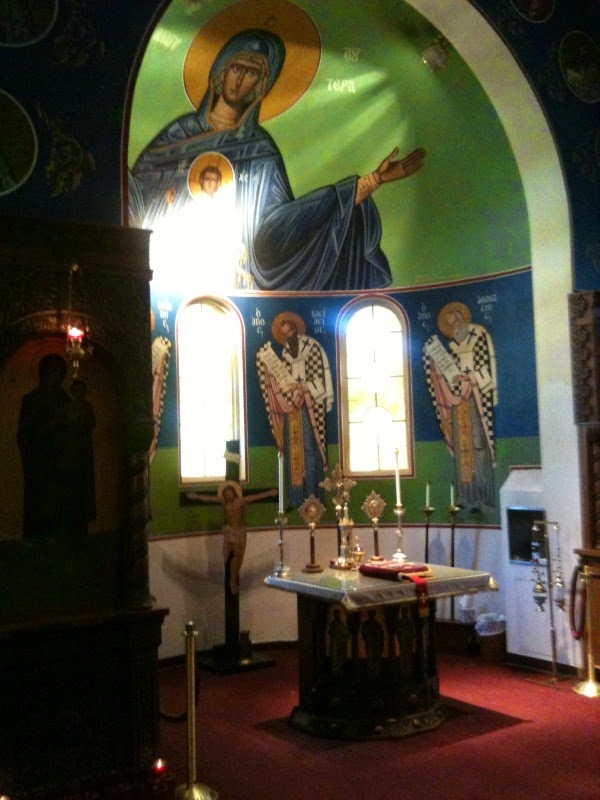 The Holy Place of the chapel where Vespers and weekday liturgies are held.
We stayed for Great Vespers, which included the funeral service
for a deceased parishioner. Usually the service is 90% English
with a few lines of Greek. Saturday was more 50-50. The tones
were very similar, in English and Greek, to the Melkite tones I know. 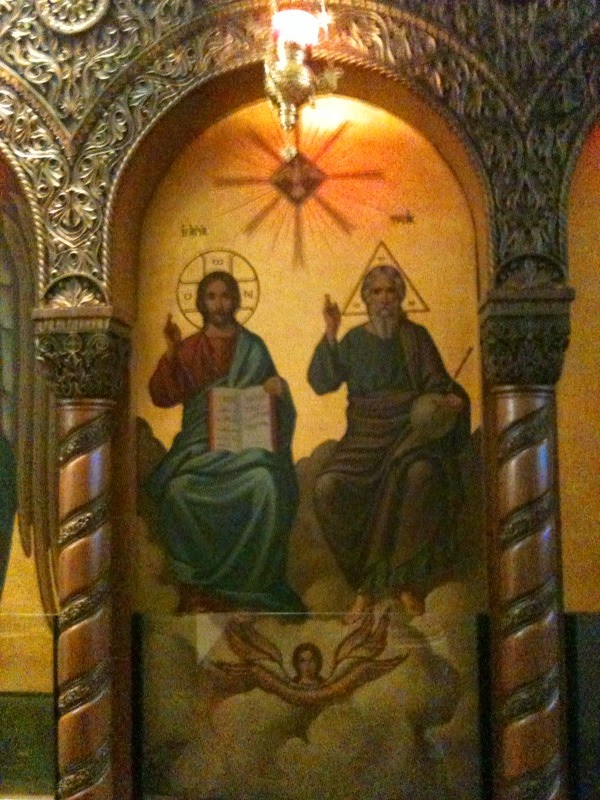 Another strange quirk is this icon in the chapel.
Byzantine iconography does not depict God the Father,
and I am not sure Roman art did prior to the Renaissance.
The iconographer wrote the icons in the chapel
un-monitored and gave us this picture of Zeus. 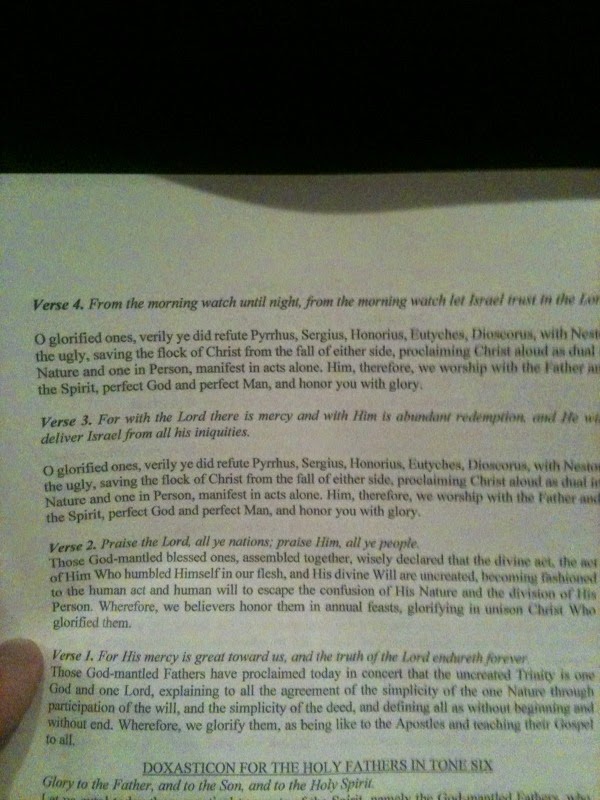 It was Vespers for the Sunday of the Holy Fathers of the First Six Ecumenical Councils.
The stichera, hymns sung between the psalm verses, can be quite explicit and didactic at times,
far from the poetic style of the Roman Office. I especially like "Nestor[ius] the ugly."
Also, note that Pope Honorius is listed among the notorious
heretics of the first millennium.
Posted by The Rad Trad at 3:19 PM