Most talks I have heard about icons, such as this one, emphasize that icons are not realistic nor are they meant to be. Instead they depict an image similar to what the reality was, but spiritualize the details and avoid lines and shadows that reflect normal life. This was not always the case. 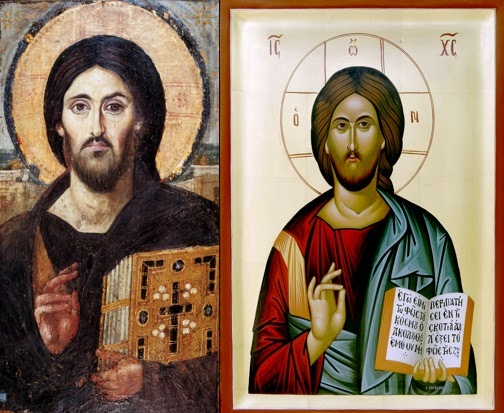 Observe the two depictions of the common Christ the Pantocrator icon, often found in first millennium Latin churches and still found in Eastern churches. The icon on the left resides in the monastery of St. Catherine on Mount Sinai in Egypt and was "written," likely using vegetable painted paint, in the 6th century. The icon on the right can be found in any Byzantine Catholic or Orthodox church around the world. The older icon takes great pains, nine centuries prior to the Renaissance, to show skin contractions created by making facial expressions, line in the neck and hands from bending skin, shadows in clothing, human skin pigments, books resembling the binding of holy books of the day, and a Semitic face. The newer and more conventional icon on the right has few if any of these features. The absence of these characteristics does not make the icon on the right deficient, but it does underscore an evolution in iconography.

To this day Russian icons look very real. The nineteenth century fascination with baroque and Renaissance art in Russia ushered in a return to realistic iconography visible still in the cathedral of Our Savior in Moscow.

In the West what we now call icons were originally mosaics or fresco styled paintings. One of my personal favorites is the Pantocrator Christ in the apse of Ss. Peter & Paul Cathedral in Cefalu, Sicily (also used as a stand in for the old St. Peter's Basilica in that atrocious Brother Sun Sister Moon film). Christ, the Blessed Mother, and the Saints are shown as realistically as first millennium artists could attempt to make them. Western artists, free from the politics and the spiritual change wrought by the iconoclast controversy in Constantinople, were free to explore new media of expression when sculpture and painting on wood came in the middle ages and marble returned in the Renaissance.

Eastern images instead took a turn toward the exclusively spiritual. Every detail of Byzantine icons carries a deeper meaning, particularly the icons highlighted during the Great Fast (Palm Sunday, the Ladder of Ascent, and the Icon of Extreme Humility come to mind). I have long held that February 19, 842 was the birth of the Orthodox Church as we know it. During a time when the Roman and Constantinopolitan churches held similar artistic and philosophical traditions, and were recently under one political system, the Byzantine tradition imbued itself with a distinctive and defining attachment to icons unknown in either the West or the non-Byzantine East—where the orthodoxy of images had not been questioned. The Greek proclivity to give icons an exclusively spiritual character would be complete during the Hesychast revival under St. Gregory Palamas and remain a permanent feature of the Orthodox Church after the fall of Constantinople to the Mohammadans, destroying the vibrant cultural and theological center of Eastern Christianity and assuring that the form of Byzantine praxis that existed in 1453 would be what survived to the present day.

Again, none of these changed are necessarily bad. Neither the right side icon at the top of the page nor the Jesus of Michelangelo's Pieta are the Jesus of the first millennium icons, and so what? They each have their own value, but we must not ignore the fact that the original impetus behind creating images means second millennium Latin artwork and Greek iconography should be seen as compliments emanating from a common origin and not as contrasts between the more ancient and original Greeks and the spiritually corrupt Latins.

Let us conclude with an excerpt of a sermon given by [St?] Photios, the ninth century archbishop of Constantinople, on the occasion of the dedication of a Panagia icon int he Hagia Sophia:

"Christ came to us in the flesh, and was borne in the arms of His Mother. This is seen and confirmed and proclaimed in pictures, the teaching made manifest by means of personal eyewitness, and impelling the spectators to unhesitating assent. Does a man hate the teaching by means of pictures? Then how could he not have previously rejected and hated the message of the Gospels? Just as speech is transmitted by hearing, so a form through sight is imprinted upon the tablets of the soul, giving to those who apprehension is not soiled by wicked doctrines a representation of knowledge concordant with piety. Martyrs have suffered for their love of God, showing with their blood the ardor of their desire, and their memory is contained in books. These deeds they are also seen performing in pictures, as painting presents the martyrdom of those blessed men more vividly to our knowledge. Others have been burnt alive, a sacrifice sanctified by their prayer, fasting and other labors. These things are conveyed both by stories and by pictures, but it is the spectators rather than the hearers who are drawn to emulation. The Virgin is holding the Creator in her arms as an infant. Who is there who would not marvel, more from the sight of it than from the report, at the magnitude of the mystery, and would not rise up to laud the ineffable condescension that surpasses all words? For even if the one introduces the other, yet the comprehension that comes about through sight is shown in very fact to be far superior to the learning that penetrates through the ears. Has a man lent his ear to a story? Has his intelligence visualized and drawn to itself what he has heard? Then, after judging it with sober attention, he deposits it in his memory. No less – indeed much greater – is the power of sight. For surely, having somehow through the outpouring and effluence of the optical rays touched and seen encompassed the object, it too sends the essence of the thing seen on to the mind, letting it be conveyed from there to the memory for the concentration of unfailing knowledge. Has the mind seen? Has it grasped? Has it visualized? Then it has effortlessly transmitted the forms of memory. Is there one who rejects the holy writings on these matters and, in spite of the fact that allies are dispelled by them, considers them to be not above dispute? Then this man has long since transgressed by scorning the veneration of holy images. Does he, on the contrary, reverence the latter, and honor them with proper respect? Then he will be disposed likewise towards the writings. If he treats either one with reverence or with contempt, he necessarily bestows the same on the other, unless, in addition to being impious, he has also abandoned reason, and is not only irreverent, but also preaches things which are in conflict with his own position. Those, therefore, who have slipped into assailing the holy images are proved not to have kept the correctness of doctrine either, but with the one they abjure the other. They do not dare confess what they believe, chary, not of being impious, but of appearing so; and they avoid the name whereof they willingly pursue the actions. Abominable in their misdeeds, they are more abominable in their impiety. Their whole offshoot has perished, branches, roots and all, even as the wondrous David in his canticle sings of the memorial of the impious being destroyed with noise, and it is He Whom they have set at naught through His picture Who has passed righteous judgment on them. But before our eyes stands motionless the Virgin carrying the Creator in her arms as an infant, depicted in painting as she is in writings and visions, an interceder for our salvation and a teacher of reverence to God, a grace of the eyes and a grace of the mind, carried by which the divine love in us is uplifted to the intelligible beauty of truth."

Email ThisBlogThis!Share to TwitterShare to FacebookShare to Pinterest
Labels: icons