[Unfortunately I have not had the leisure to study more deeply into the cult of the "Apostle to the Apostles" since writing this short overview last year. The uncertainty surrounding her identity—is St. Mary Magdalene the sister of Sts. Martha and Lazarus or another woman altogether?—does lead to devotional difficulties, not to mention minor ecumenical hardships. I tend to side with the Roman tradition on this matter, as on many others, but not nearly with the level of certainty I give to "Old" St. Joseph. The academic study of hagiography too quickly splits into schools of skepticism (the majority) and credulity (the clear but vocal minority), and Catholic intellectuals rarely approach these subjects with both thoughtfulness and reverence.]

Last month Pope Francis promoted the commemoration of St. Mary Magdalen in the new kalendar to a feast, prompting a small flurry of discussion about the true identity of the Apostolorum Apostola. The western conflation of Magdalen with the sister of St. Martha has a long and noble tradition dating back at least to Pope Gregory the Dialogist, but in the east the Orthodox have long considered them to be distinct persons.

After finishing my Josephology series, I had considered writing a short series on the history of Mary Magdalen in liturgical history, but most of the books on the subject were written either from a neo-Gnostic or an egregiously feminist philosophical base. The few Orthodox sources I could find were polemically anti-occidental, so finding a sober consideration of this great saint was next to impossible. (Honestly, is it really so difficult to think that a woman from whom was cast seven devils might have been a great sinner?)

Personally, I find the scriptural argument for conflating the two Marys and the female “sinner” reasonable if not absolutely compelling. It would be strange if the women Luke and John describe as having anointed the feet of Christ with their hair were two separate people, and John’s Gospel suggests that Mary of Bethany indeed anointed his feet twice. “Mary who is called Magdalen” is named just after Luke’s narrative of the penitent prostitute, suggesting but not necessitating a connection. But it is reasonable that the Mary who had anointed Christ’s feet in preparation for his burial would also be the one to go out to the Holy Sepulchre to anoint his dead body.

Hugh Pope constructs this possible sequence of events for the “conflated” penitent and Marys:


In the view we have advocated the series of events forms a consistent whole; the “sinner” comes early in the ministry to seek for pardon; she is described immediately afterwards as Mary Magdalen “out of whom seven devils were gone forth”; shortly after, we find her “sitting at the Lord’s feet and hearing His words.” To the Catholic mind it all seems fitting and natural. At a later period Mary and Martha turn to “the Christ, the Son of the Living God”, and He restores to them their brother Lazarus; a short time afterwards they make Him a supper and Mary once more repeats the act she had performed when a penitent. At the Passion she stands near by; she sees Him laid in the tomb; and she is the first witness of His Resurrection—excepting always His Mother, to whom He must needs have appeared first, though the New Testament is silent on this point. In our view, then, there were two anointings of Christ’s feet—it should surely be no difficulty that St. Matthew and St. Mark speak of His head—the first (Luke 7) took place at a comparatively early date; the second, two days before the last Passover. But it was one and the same woman who performed this pious act on each occasion. 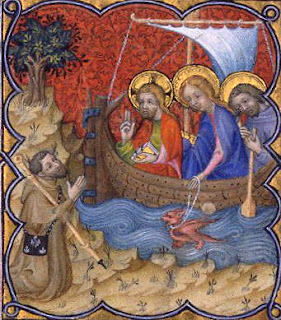 The Protestant separation of the Marys was not ubiquitous even among the heretics. Although John Calvin explicitly separated Mary of Bethany from Mary Magdalen in his Gospel commentaries, the Lutheran and Anglican sects retained the Gregorian hagiographical tradition.

I cannot agree with Fr. Erlenbush that the Latin tradition and the common post-Gregorian papal opinion of Marian conflation easily proves the Roman martyrology correct, as if the eastern tradition was not worthy of account. Perhaps someday a future Council will consider this topic worthy of dogmatic clarification, but for now we must live with some measure of uncertainty.

The Greeks say that the Myrrh-Bearer Magdalen lived with St. John and the Blessed Virgin in Ephesus for many years until her death. The Latin tradition has her being cast into the sea on a small boat with Martha and Lazarus until their ship found the coasts of France. From there, Mary made her retirement as a hermit until her death. The medieval Golden Legend describes her desert life:


In this meanwhile the blessed Mary Magdalene, desirous of sovereign contemplation, sought a right sharp desert, and took a place which was ordained by the angel of God, and abode there by the space of thirty years without knowledge of anybody. In which place she had no comfort of running water, nor solace of trees, nor of herbs. And that was because our Redeemer did do show it openly, that he had ordained for her refection celestial, and no bodily meats. And every day at every hour canonical she was lifted up in the air of angels, and heard the glorious song of the heavenly companies with her bodily ears. Of which she was fed and filled with right sweet meats, and then was brought again by the angels unto her proper place, in such wise as she had no need of corporal nourishing.

The head of Mary Magdalen is believed to be held in La Sainte-Baume, in the south of France.