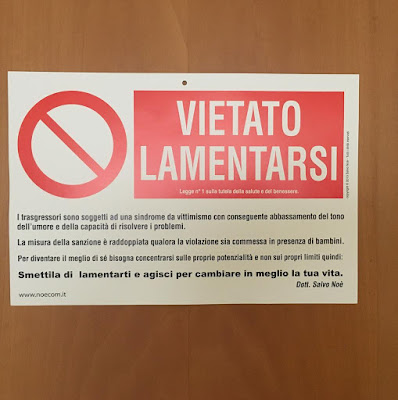 Few symbols can summarize the banality of the current papacy better than this "Complaining is Forbidden" sign on Pope Francis's apartment door. The sign was a gift from Italian self-help writer Salvo Noé, a man with the least sincere smile that side of the Atlantic. News outlets around the world are praising the sign as a sign (ahem) that conservatives are getting too whiny about the disregard The Francis extends to their half-baked heroes like Müller and Burke. It is certainly a sign that Papa Piagnone doesn't mind the paradox of hypocrisy. 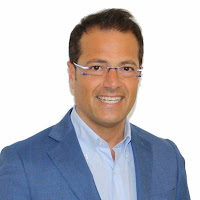 To be sure, there are plenty of whiners in the Catholic Alt-Right. Christopher Ferrara, Esq. never ceases to hiss at the Dubia cardinals, no doubt excoriating poor Cdl. Meisner even beyond the grave. Steve Skojec screams about beta masculinity at anyone who contradicts him on American politics. Frank Walker's barrel of sarcasm never runs dry. Louie Verrecchio and Ann "Crazy Eyes" Barnhardt boldly proclaim Long-Faced Francis an antipope. Anonymous traddy priests upload sermons about the dangers of gossip and Harry Potter while the world burns.

Last week I had the pleasure of witnessing the marriage of two very close long-time friends. The wedding was beautifully done, the reception was full of decent food and fun dancing, and the send-off was cheerfully memorable. The world may be crumbling, but that is no excuse to forgo feasting and family, to ignore the good things God still gives us. Our pope is at least correct that joy is a necessary part of the Christian life, even in the midst of turmoil. The City of Man can never overcome the City of God.

While it is necessary to point out the nudity of the Emperor, it is unseemly to stare at it for any great length of time. Noe's prudent sons covered his nakedness in his drunken stupor, but if he had belligerently refused to be clothed, what could they have done but walk away? Francis doesn't want complainers near his door because he does not want any harsh truths being spoken in his hearing. No true prophets are desired in his presence.

"For the Lord hath mingled for you the spirit of a deep sleep. He will shut up your eyes, he will cover your prophets and princes that see visions. Wisdom shall perish from their wise men, and the understanding of their prudent men shall be hid."

Papa Bergoglio no longer wishes to hear what his critics have to say. He wishes to have his ears tickled and his feet massaged. The only reason to criticize his words and actions is to remove the stumbling block that is Francis from the path of one's fellow Catholics and inquirers of good will. Let not the Bishop of Rome be a scandal against the practice of the Faith.