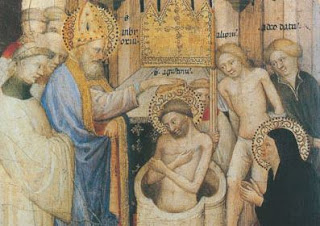 "Ball and chain." That is the term we use to describe the wife in marriage these days. Before tying the knot we call the process "settling down." Contemporary society holds marriage in derision, and not without good reason. What was once a promise before God to care for the other and to provide souls for the Church is now a nod of recognition to preceding love, or lust, between two people with the option to leave at any time; children are optional. No wonder modern Christians are unable to contest the pseudo-unions of homosexuals. Today the single life reigns supreme. Even those in relationships treat them as expensive, voluntary associations: I will share the bed with you and split the bills till death do us part, or till something better comes along. It was not always like this for the married, and certainly not for the single. A clerk in a cigar store summed up the modern prescription when he advised me, "Don't get married, dude. Just get some and make money."

From ancient times until a century ago marriage meant many things: the promise between two people, the maturity and responsibility of the two, the man and woman coming into their independence, the creation of a family unit with its associated trappings of home and business, and the union of two other families. Marriage was the natural end to which a grown man aspired. To forfeit marriage was an unusual, even extraordinary act. And yet this is what St. Augustine did.

Augustine worked in Rome and Milan, then capital of the Western Roman Empire, as court orator primarily, while also taking students who wished to imitate his rhetoric and segue into political life. Augustine kept a concubine (today called a live-in girlfriend) and recalled his fidelity to her bed as God's way of showing him what a genuine marital union is not. His relationship bore him a son, a bright young boy named Adeodatus ("given by God). Still, Augustine's saintly mother, Monica, was embarrassed and sent the concubine back to Carthage after arranging a marriage with a woman of good repute.

Augustine declared himself a catechumen in the Church and intellectually assented to the Church's teachings, albeit with difficulty towards the understanding of evil, yet he could not accept Baptism while he "was in both the flesh and the spirit." More self-aware than the hedonists of today, pagan Augustine found himself a slave to sex and none the happier for it. "But it was my own doing," he wrote, "that habit gripped me so fiercely."

He founds some solace in the friendship of Alypius, another pagan of some natural virtue who, like young friends today, joined Augustine in becoming mutual bad influences on each other. Alypius and Augustine shared a villa outside of Milan where they made conversation and contemplated philosophical questions after working hours. It was in this villa that a local named Ponticianus brought St. Athansius' Life of Saint Anthony and read it aloud to them, as was the custom before St. Ambrose popularized sub-sonic reading.


"But as Ponticianus told his story, the more ardent the love I felt for those men who, as I was hearing, had been moved to such a wholesome frame of mind, in that they had entrusted themselves wholly to you for their healing, the more I loathed and execrated myself in comparison with them. Many years—perhaps twelve—had flowed away (and my life with them) since in my nineteenth I had read Cicero's Hortensius and been stirred up to a zeal for wisdom, and all that time I had postponed the decision to despise earthly happiness and leave myself free to hunt for wisdom instead."

Grief and regret overtook Augustine. He and Alypius sauntered through the villa garden until he had to be alone. It was in this solitary, twisting, gnarly moment that Augustine heard a child singing in a neighboring house "Tolle, lege." The African expatriate took the child's song to have a spiritual meaning; he looked down and found a binding of the Pauline epistles, he opened it at random and read, "Not in riotousness and drunkenness, not in lewdness and wantonness, not in strife and rivalry; but put on the Lord Jesus Christ, and make no provision for the flesh and its lusts" (Romans 13:13-14). As would happen with the Angelic Doctor eight centuries later, in this moment God released Augustine from his fleshly temptations and enamored him with a life detached from all worldly cares, even those of the family.


"For, from the direction in which i had set my face, and towards which I hesitated to go, Continence was now revealed to me in all her chaste beauty. Serene she was, not full of dissolute mirth, and nor was there anything dishonorable in her alluring voice as she bade me to come and not to doubt, and her pious hands, as she stretched them out to welcome me and fold me to herself, were full of sheep of your flock, good examples for me. There were many boys and girls, men and women newly come to adulthood and of every age, grave widows and aged virgins; and in not one of them was Continence barren, but a mother of children."

It was precisely in this context—a lament over sexual sin and the prospect of a marriage for the sake of getting on with it—that Augustine took the book and read St. Paul's words. Augustine resolved to receive Baptism, which he did, along with Alypius and Adeodatus, from the hand of bishop Ambrose in Milan at the Paschal vigil in 386. Augustine brought the Italian phenomenon of continent men, ordained or lay, living in community back to Carthage and Hippo when he returned there. What had been the way of hermits and monks now became a common bond between men who wished to live singularly for God in an age still weaning off paganism and slowly embracing a Christianized outlook on family life. Augustine and his community lived apart from the world in plain sight.

How St. Augustine's liberation from sensual bondage and resolve to live for God contrasts with our modern view of the celibate parish priest as a limp-wristed eunuch! Before the 20th century, the continent life was viewed an nigh impossible, save for men with remarkable self control. The joke had been that "Father is a man and must be seeing someone in the rectory." Even Hitler perverted celibacy to his own end, hiding Eva Braun and presenting himself as a man whose sole purpose in life was the betterment of Germany.

Christian society has enough ground to make up merely in sanctifying the institution of marriage again that consideration of holy bachelorhood seems frivolous, but is it? A man or woman who has not castrated himself from family life, but rather who has found the world wanting and instead embraced the friendship of God is a sermon unto itself. A habited nun looks enough like a walking prayer to give pause. What of a man who does the same? What a contrast to the wisdom of the age... and to the clerk in the cigar shop....
Posted by The Rad Trad at 9:13 PM