After the Reformation III: The Incomplete Christian

The battles for orthodoxy have left many losers throughout the centuries. With the wealth of divine revelation that came from the Incarnate God through his Apostles, misunderstandings and intentional perversions abounded almost immediately in the infant Church. Simon Peter's paternal mission of protecting the treasure of revelation was opposed by Simon Magus, the father of Gnosticism and—according to many Church Fathers—all heresies. Since the expulsion of Simon from the Church, ecclesiastical history has seen similar treatment given to the Arians, Montanists, Pelagians, Docetists, iconoclasts, Albigensians, Lutherans, and many more. The errors that degrade and deform the true Faith are necessarily anathematized and cast into the outer darkness.

Some of these heresies lingered for centuries after their explicit condemnation. Arianism was anathematized in AD 381, but St. Boethius was sentenced to death by an Arian king in 524, and it survived in organized form until at least the 7th century in North Africa. There's an old joke that goes like this:


Two men considering a religious vocation were having a conversation. The first asked, "How can we compare the Jesuits and Dominicans?"

"Then what's different between the Jesuits and Dominicans?"

But that isn't entirely fair. While the Lutheran heresy has lingered for five hundred years, it has done so by way of constant mutation, and it is hardly unique in its longevity. By the time the Church condemned Protestant errors at Trent, men of notable intelligence had already been getting creative with Luther's theology and making it their own, and papal respect had been so greatly diminished among the populace that few cared any longer what the bishop of distant Rome had to say.

The Counter-Reformation fought back with a renewed sense of Thomism, but Protestants were so successful everywhere they went that the Church had to take a defensive approach in places where the Catholic Faith had once reigned uncontested. A siege mentality may be necessary from time to time, but it is not conducive to social health. A city under blockade will not survive for long without suffering from famine and plague, even if it is not ultimately conquered. Likewise, the Church suffered for centuries under a war of attrition by Luther and his armies, and the wide open fields of Christendom were traded for bunkers and priest holes. P. John XXIII's admonition to "throw open the windows of the Church" was not a sign that the enemies of God had stopped lobbing mustard gas our way, but that he was tired of smelling his fellow bishops' funk.

Since then we have engaged in an uneasy truce with the mutant grandchildren of Luther and his fish-barrel wife. The alternative to closed-door, manualistic gas was the recognition of our former enemies as fellow men of faith. The condemnations of Trent died the death of a thousand qualifications, and only positive acclamations of Protestant doctrine and practice were permitted to be voiced. The mere practice of baptism was enough for the Council Fathers to declare them as "separated brethren": "For men who believe in Christ and have been truly baptized are in communion with the Catholic Church even though this communion is imperfect"—surely this was a surprise to the millions of Evangelicals who still considered the papacy to be something akin to the Whore of Babylon!

So now we have Christians who are in "imperfect" communion with the Church of God (e.g., Lutherans and Presbyterians), and those who are in "perfect" communion (e.g., Cdls. Kasper and Mahoney). Catholic clerics endlessly praise the love Protestants have for the Holy Writ, and their desire for a "personal relationship" with Jesus. The Protestant is idealized and made an exemplar of Catholic piety, even though his spiritual life is often composed of a series of existential crises rather than solid faith and hope.

Some Catholic converts from Protestant sects refuse to even call themselves converts, preferring rather to express their move as a growth into the fullness of Christian reality. No longer is Luther a heretic to be condemned, but a misunderstood German theologian—aren't they all?—who only wanted the best for the Church. The traditional anathema was necessary for the mental health of Catholics cleric and lay, for it allowed them to see reality as it actually was. Now we are forced at gunpoint to see only the good in the enemies of the Church, and so we have descended gradually but inevitably into actual madness.

Heretics are men who have made shipwreck of their faith, and they visit their sin upon their third and fourth generations by denying them the means of salvation. If they are mindful enough to baptize their sons, even these deny themselves salvation as soon as they are old and knowledgable enough to repudiate the Catholic Faith. (In some Protestant circles this is practically a rite of passage.) Since more and more Protestants no longer even baptize in an acceptable manner, the single Sacrament they could once boast is slipping from their grasp. They stand naked and trembling before the gaze of Heaven. It is a terrible thing to possess knowledge of Christ and salvation, but to lack the means to attain it. 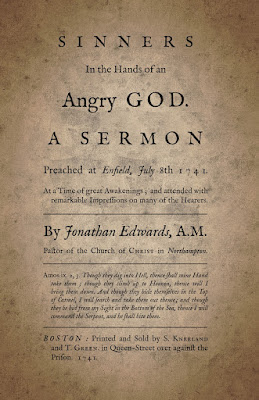